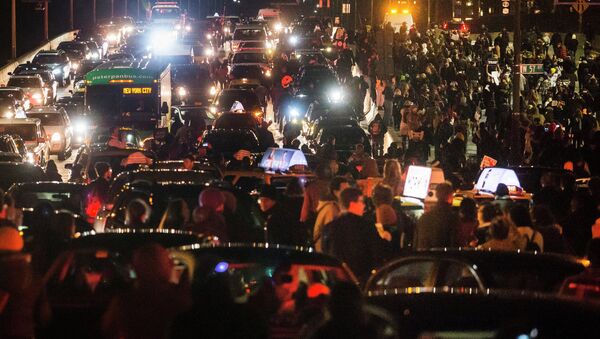 © REUTERS / Adrees Latif
Subscribe
Esaw Garner, the widow of the black man, who was killed by white police officer Daniel Pantaleo, has not accepted Pantaleo’s condolences. On Wednesday, a grand jury decided not to press charges against the police officer, sparking protests.

Eric Garner Protests in NYC Lead to Over 30 Arrests
MOSCOW, December 4 (Sputnik) – Esaw Garner, the widow of the black man, who was killed by white police officer Daniel Pantaleo, has rejected his apology and condolences.

"No I don't accept his apology. No, I could care less about his condolences. He's still working, he's still getting a paycheck, he's still feeding his kids. And my husband is six feet under, and I'm looking for a way to feed my kids now," Esaw Garner said during a press conference with Rev. Al Sharpton.

Earlier, on Wednesday, Pantaleo issued a statement of apology, published by Patrolmen's Benevolent Association. "I became a police officer to help people and to protect those who can’t protect themselves," Pantaleo said.  "It is never my intention to harm anyone and I feel very bad about the death of Mr. Garner.  My family and I include him and his family in our prayers and I hope that they will accept my personal condolences for their loss," he added.

"The time for remorse would have been when my husband was yelling to breathe. That would have been time for him to show some type of remorse, or some type of care for another human being's life when he was screaming 11 times that he can’t breathe," Esaw Garner said in response to Pantaleo’s statement. "So there is nothing that him or his prayers or anything else would make me feel any different," she added during a press conference with Rev. Al Sharpton.

US Civil Rights Leader Announces March in Washington Over Garner Ruling
Garner, who was asthmatic, died from suffocation in July after being put in a chokehold by police officer Daniel Pantaleo. A bystander recorded a video of the police officers arresting Garner, who had previously sold untaxed cigarettes, and of Pantaleo later choking the man to death, as Garner cried out "I can't breathe, I can't breathe." The video went viral online.

On Wednesday, a grand jury decided not to press charges against Pantaleo, sparking protests.

"I am truly disappointed [with] the grand jury’s decision this evening. I don’t know what video they were looking at. Evidently, it wasn’t the same the one that rest of the world was looking at," Gwen Carr, Eric Garner’s mother, said. "How could we put our trust in the justice system when they fail us like this?" she asked.

Wednesday's grand jury decision on Garner follows another similar case in Ferguson, Missouri, where African-American teenager Michael Brown was killed by a white police officer in August. That killing and a similar verdict by a grand jury not to indict officer Darren Wilson last week has set off nationwide protests and renewed debates over police brutality.