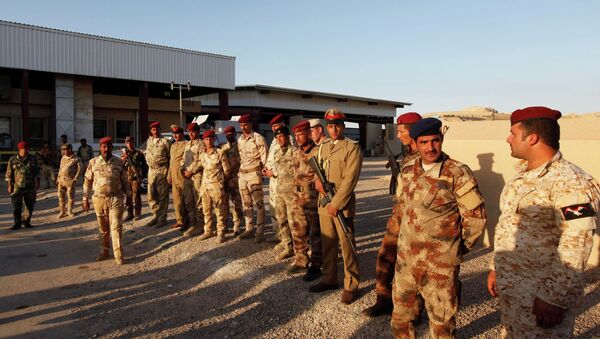 According to the recently revealed results of a governmental investigation, practically every fifth soldier of the Iraqi armed forces existed only on paper.

Iraqi PM’s Graft Probe Finds 50,000 ‘Ghost Soldiers’
MOSCOW, December 4 (Sputnik), Alexander Mosesov — As the Iraqi Armed Forces have suffered crushing defeats to the Islamic State (IS) terrorist group in 2014, the jihadists have not only captured half of Iraq's territory, but also revealed the poor combat capabilities of the country's military.

Serious questions have been raised as to why the Iraqi Security Forces (ISF), a collective name for the country's military and law enforcement forces, have coped so badly with their main task – defending the security and integrity of Iraq. The recently case of "ghost" soldiers could go some way to explaining part of this.

Iraqi Prime Minister Haider Abadi fired 24 senior officials after a government investigation revealed the existence of at least 50,000 "ghost" soldiers, in other words, soldiers on the military payroll but not on duty. A 50,000-wide hole in any country’s defenses is a huge blow, especially for Iraq which is already outgunned by most of its neighbors in the Middle East.

"50,000 is an astronomical number. 'Ghost' soldiers were indeed a reason why Mosul [Iraq's second-largest city after Baghdad], for example, fell so quickly. It was reported then that from 25,000 [soldiers] that were listed [to be on duty], only 10,000 were present," Renad Mansour, former adviser to Iraq's Kurdistan Regional Government told Sputnik News Agency.

Iraq to Request NATO’s Support in Increasing Defense Capacity
The Iraqi Army, according to various sources, has around 270,000 active military personnel. Assuming that these 50,000 'ghost' soldiers were part of this figure of active personnel, practically every fifth soldier existed only on paper. Some have voiced suspicions that this number could be even larger.

"I am really not in a position to know if 50,000 is an accurate number. However, given the levels in corruption in Iraq over recent years it is not impossible," Director of the Council for the Advancement of Arab-British Understanding (Caabu), Chris Doyle told Sputnik News Agency.

Confidence in the combat capabilities of the Iraqi Armed Forces has been seriously shaken by the issue. "From 2003 to 2011, it was reported that the United States spent $25 billion and built 109 brigades in the ISF. Despite this, and military training from one of the top in the world, the ISF was not able to defend the Sunni areas of Iraq from the re-emergence of ISIL," Renad Mansour said.

Stressing the urgency in resolving the issue, the Director of Caabu anticipated that genuine figures for military personnel will help in planning ISF operations. "It will allow military planners to know how many troops there are and where," Doyle added.

Inflated headcount figures are not the only chink in the Iraqi defense forces armor.

Reports of desertion, Iraqi soldiers fleeing positions leaving expensive US weaponry behind by have been common during this year’s lightning-fast summer offensive by IS, have damaged troop morale.

Steinmeier Assures Iraqi Premier of German Support Against IS
"Purges all over the ISF, from top to bottom, are a result of a failure in command and execution; that saw Iraq’s second largest city, Mosul, occupied by ISIL fighters. Until today, they are unable to regain it, and thus, morale of the troops, after losing to such a group, is low," former adviser to Iraq's Kurdistan Regional Government told Sputnik.

Raising the issue of military funding, Renad Mansour said that, "allegations that former Prime Minister [Nouri] Maliki spent much of the 2014 budget, which was never passed, means that [Iraqi Prime Minister Haider] Abadi has had difficulties finding resources to fund initiatives to rebuild the ISF. The fall in the price of oil and lower export rates have also affected projected revenues. Iraq is now bankrupt and suffers a cash flow problem."

US Warplanes May Have Airlifted Weapons to IS Militants: Iraqi Official
Unity within the Iraqi army has been strained by the actions of sectarian paramilitaries. "These [Shi'a] militias are outside the control of the ISF and engage in kidnappings, extortion, and murders without fear of repercussion. These acts, mainly against Sunni Iraqis, jeopardize Abadi’s rapprochement efforts. Moreover, Sunni tribes also have their own fighting forces, again outside of governmental confines," Renad Mansour told Sputnik News Agency.

The Director of Caabu expressed a similar point of view, when he warned that, "the army must represent Iraq and not be at all sectarian but is it? Not yet."

In short, the position Islamic State currently enjoys in Iraq is a lesson to all, an example of how a larger, better-equipped army but with serious internal problems can fail to defend itself against a seemingly vastly weaker opponent.