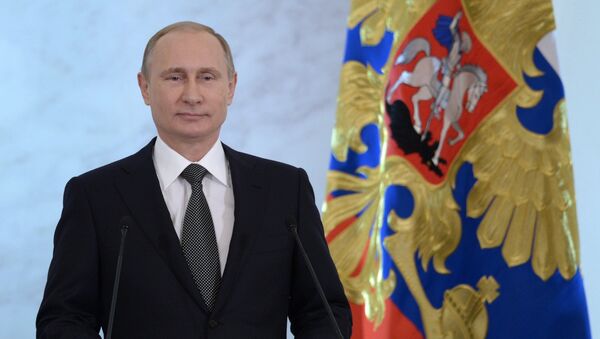 © Sputnik / Aleksey Nikolskyi
/
Go to the photo bank
Subscribe
Russian President Vladimir Putin has delivered his annual address to members of the Russian parliament. During his speech Vladimir Putin evaluates the current situation in Russia and its position in the world and outlines the country’s future development goals.

Putin: No Way Can Seizure of Power, Mass Killings in Odessa Be Endorsed
09:06 GMT:

This event is particularly important because Russian people live in Crimea, a territory of strategic importance.

Russia supported many former Soviet republics on their way to sovereignty in the 1990s and will continue to do so.

Putin: Under No Circumstances Will Moscow Stop Cooperating With Europe, US
09:14 GMT:

Our American partners have always been influencing our neighbors.

What Ukraine really needs is help for its economy to carry out reforms. Russia supported Ukraine financially.

For Russia, national sovereignty is the most important condition for existence.

We should strengthen the status of international law.

It is useless to try talking to Russia from a position of strength even when it faces internal differences.

We should not forget the lessons of the past. Just like Hitler failed with his misantrophic ideas, he failed to destroy Russia — everyone should remember how this ends.

We are not going to get ourselves dragged into an arms race but, no one will be able to get a military edge over Russia.

We will continue to stand up for global diversity, so that everyone will see the true, undistorted image of Russia.

We will never choose self-isolation, we are strong and confident. Our purpose is to have as many reliable partners as possible, in the West and in the East.

Many global economic powers are Russia's partners and friends.

Russia is open to the world, open for cooperation, and attracts investment, but our development depends on ourselves in the first place. Sanctions imposed on Russia should be an incentive to reach our tasks ahead of time — we need to become competitive. We have all the necessary reserves for that.

He who loves Russia should want it to be free, Ivan Ilyin said.

Relations between the state and business sector should be based on equality and partnership.

We need to relieve tax burdens on businesses, especially start-ups.

Full tax amnesty means that those who bring their capital to Russia should not be investigated as to where they had got their money. Let us give a chance to everyone who wants to return capital to Russia.

The origins of fortunes may be different, but we need to turn the page of offshore capital in the history of our country.

Russia has gone a long way in improving the nation's business climate.

We will provide special conditions for developing tourism and fisheries in Crimea.

Putin: Russian Business Should Be Freed From Obsessive Control
09:40 GMT:

We will fulfill our plans to develop Russia's Far East.

Our economy should match our geopolitical role and strengthen our influence.

Economic efficiency and productivity should increase every year.

Dependence on foreign technology and products, for instance drilling equipment, should be minimized.

Priority should be given to Russian companies and contractors. If we buy products or technologies from abroad, they should be unique.

We should bring the level of internal investment to at least 25 percent. Our investment should work for development, not capital outflow.

Russia's savings should become a source for investing in development.

Russia needs to increase the stability of its banking system.

Embezzlement of defense money is a direct threat to the country just like the financing of terrorism.

Russia should become a producer of ideas and technologies. Russia is capable of modernizing its economy and providing new ideas for the whole world.

I suggest to create a national technology initiative.

The core of economic development is having trained and skilled workers and professionals.

In the early 2000s UN experts predicted Russia's demographic decline, but at the moment our population consists of 144 million people and it is increasing. Russia has been witnessing a natural increase in its population. Our demography programs have proven effective.

The Sochi Winter Olympic Games have played a vital role in promoting a healthy lifestyle.

The personal qualities of medical workers are extremely important for the development of medicine. Thus, we need to create good working conditions for doctors.

Education, healthcare and social care is a true public benefit.

We need to create more platforms for dialogue between the state and civil society.

This year, like previously years during which important events of Russian history took place, is decisive. Challenges offer us new opportunities.

This year the tradition celebrates its 20th anniversary. The first such address was made by Boris Yeltsin on February 24, 1994.

Last year, the annual address took place on December 12. The president announced a number of important initiatives, in particular, municipal reform and fair rules for offshore companies. He also talked about the development of Russia’s Far Eastern and Siberian territories, despite the difficult economic situation.