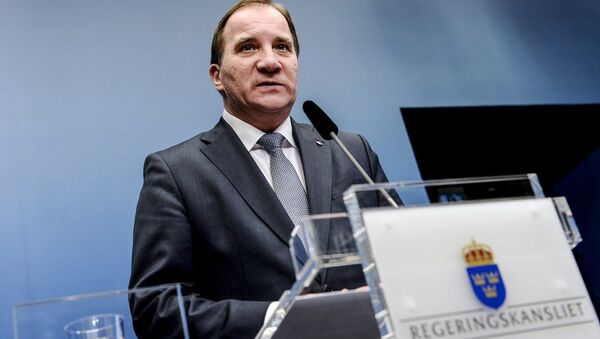 “We have made the decision that new elections will be held March 22,” Lofven told reporters.

“This is an irresponsible act with no equivalent in Sweden’s modern political history,” the minister said.

The announcement comes just two months after the members of Sweden’s new cabinet assumed their positions.

Swedish PM Calls for Emergency Meeting as Democrats Reject Budget Proposal
Earlier on Wednesday, the nationalist Sweden Democrats (SD) party rejected the minority center-left government’s budget proposal, choosing instead to back a rival budget proposed by the Alliance, a Swedish center-right political bloc, leaving the government with the minority of votes.

Some 182 lawmakers reportedly voted for the Alliance’s budget, while the government’s proposal received 153 votes.

SD first announced its decision to vote down the government’s budget on Tuesday, forcing Lofven to call for an emergency night meeting with the Alliance. The bloc rejected cooperating with the government on the budget, stating that they would vote for their own budget proposal.

“I will not take further initiative to talks. It seems like this time has passed. If the other parties wish to speak, they know where to find me,” Lofven said as he announced the early elections.

Sweden's current government is made up of two parties, the Swedish Social Democratic Party and the environmentalist Green Party, and is backed by some 39,5 percent of seats in the parliament.

The Sweden Democrats party, known for its anti-immigration stance, currently holds 49 of the 349 seats in Sweden's parliament and is not part of any political alliance. The remaining parties have repeatedly ruled out cooperation with SD.