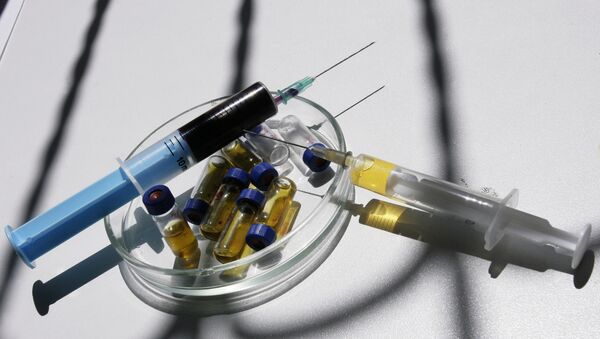 © Sputnik / Sergei Venyavski
/
Go to the photo bank
Subscribe
The bill was cleared by the Ohio House Thursday.

Number of Executions in US Reduces Due to Problems With Lethal Injections
MOSCOW, December 3 (Sputnik) — The Ohio Senate has started hearing a bill that would shield the names of companies who provide lethal injection drugs to the state for at least 20 years, AP reports.

The measure does not presume that a vendor will receive anonymity automatically. A company would have to apply specifically for it under an agreement that would allow it to reveal its name two decades after it last provided drugs to the state.

The bill gives judges the opportunity to gain information about a drugmaker after consultation with Ohio’s prisons department.

In Ohio, executions have been suspended since death row inmate Dennis McGuire was executed with the country’s first use of a two-drug combination in January. He took 26 minutes to die, repeatedly gasping and snorting. In July, the execution of an inmate in Arizona with the same drugs took two hours.

Ohio’s first choice of a pharmaceutical compounded is pentobarbital and has been used in Texas and Missouri, both of which will not reveal the name of its maker. Ohio has been unable to obtain the drug.

Ohio’s next execution is scheduled to February 11. The state must determine whether it has enough drugs 30 days before the date.