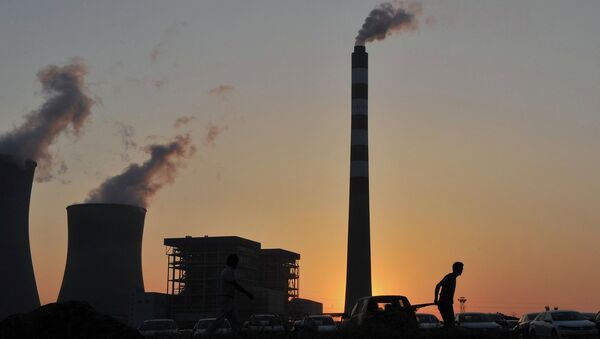 Thirty years ago, a US chemical factory leaked 27 tons of the deadly methyl isocyanate gas, swamping a large part of Bhopal’s residential area and killing more than 10,000 people.

MOSCOW, December 3 (Sputnik) — On the night of December 2, 1984 Union Carbide’s pesticide factory in Bhopal, India, began leaking 80,000 pounds of toxic gas, poisoning more than half a million people. It’s estimated that up to 10,000 people died in the first three days, as chemicals damaged their internal organs. Many choked to death on their own fluids, while thousands more have been suffering a slow and painful death since, reports Amnesty International.

Those who survived the gas leak still suffer today with damage done to their lungs, eyes or wombs. The Sambhavna clinic, a charitable trust founded by Sathyu Sarangi in 1984 to treat patients after the disaster, treats around 150 people daily.

The diseases include anemia, jaundice, kidney damage, cerebral palsy, birth defects, gynecological problems and immune system disorders. Many of these diseases are due to heavy metals found in the mud and water around the plant. The clinic estimates that between 120,000 and 150,000 survivors of the disaster are still chronically ill, as reported by Amnesty International.

By contrast to how it deals with foreign companies polluting its own region, the US government has done little to help India over Bhopal. Earlier this year, US courts ruled BP could face up to $18 billion dollars in fines for polluting the Gulf of Mexico. Yet the government has not pushed for Union Carbide to face justice and pay the survivors the compensation they deserve. On the other hand, the US is providing Union Carbide a safe haven from justice.

In 1989, the government asked Union Carbide to pay a $470 million compensation agreement, which averages less than a thousand dollars per person affected.

Today Union Carbide and its new owners Dow Chemicals point to that agreement, saying that the matter was settled.

“If Dow Chemicals clean up in Bhopal, it would be an admission of their guilt,” says Rasheeda Bee, who helps run Chingari Trust. “They would rather provide safe drinking water elsewhere,” says Bee, referring to Dow’s corporate social-responsibility activities in other parts of the country that involve water purification, as reported by Al-Jazeera.

Amnesty International has supported the Sambhavna clinic, Bhopal Medical Appeal and other organizations in their demand for a clean-up, proper healthcare and a fair compensation from Union Carbide. They also want Union Carbide to be charged with a criminal case, as the matter is of culpable homicide.

This year, Hollywood giant Martin Sheen, who stars with Mischa Barton and Kal Penn in A Prayer for Rain, a dramatized account of the 1984 catastrophe, will show the events of the catastrophe and raise awareness of how the situation in Bhopal is far from under control.

Martin Sheen to Join Amnesty Int'l for Justice in India’s Bhopal Tragedy
As reported by EuroNews, Heera Bai a victim of the disaster has said, “It feels like I have cobwebs in my eyes, I don’t have light in my eyes and walking is difficult.” Satinath Sarangi representative of victims said, “Both governments and NGO’s have shown that up to three and a half kilometers around the factory and 20 meters underground, there are chemicals that cause serious problems, cancer, birth defects, still nothing has been done.”

In 2010, seven low-level Indian officials were found guilty of “death by negligence” and “culpable homicide not amounting to murder” and sentenced to two years in prison, reports Euro News.

Not a single high-level American manager has ever faced justice.