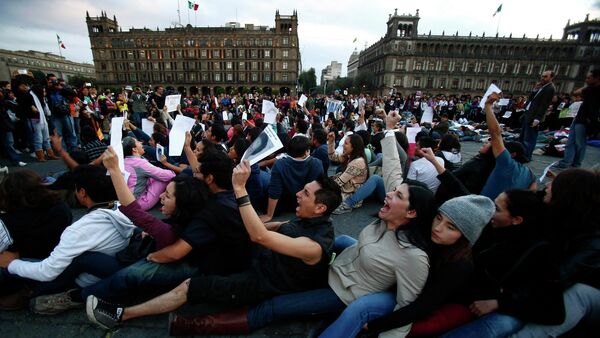 American activists decided to hold rallies in more than 43 cities in solidarity with Mexico, where 43 students have been missing since September. Demonstrators claim that US attempts to boost Mexico's anti-drug policy trigger bloodshed and corruption.

Eleven Mutilated Bodies Found in Mexican State Where Students Disappeared
MOSCOW, December 3 (Sputnik) - US activists are planning to take to the streets on December 3 in order to express their solidarity with the people of Mexico and to draw attention to the 43 students, who went missing in Mexico in September, the #UStired2, a group aimed at ending US failed policy toward Mexico, announced.

"Our effort has one goal: working in the United States to promote peace as an alternative to the catastrophically failed drug war that has left more than 100,000 dead and 25,000 people disappeared in Mexico," the campaign stated on its official website.

Come out this Wednesday! Please visit http://t.co/0CWAHSDBZY to see about rallies near you! #UStired2 #Ayotzinapa pic.twitter.com/d0qKbiLX7o

"For many in these United States, images of mass graves in Mexico or stories like that of the 43 missing Normalista students of Ayotzinapa are disturbing, but far away. For others of us, Mexico is not just a "foreign policy issue." Mexico es familia [Mexico is family]," the campaign added.

Mexican President Says Protests Over Missing Students Destabilize Country
According to the campaign's website, more than 43 cities in the United States will participate in civic action, one for every missing student. The campaign aims to compel the US government to take action on the issue, as, according to the Leahy Amendment cited by the campaign, the US government must stop aiding the security forces of governments who use them to violate human rights.

The protesters are using a number of hashtags on social media to draw public attention to what is happening in Mexico including #YaMeCanse [I am fed up], #UStired2, #Ayotzinapa and #SOSMexico.

On September 26, a group of policemen, accompanied by armed gang members from local drug cartels, abducted students protesting against discriminatory hiring and funding practices in the city of Iguala. Six people died in the initial conflict and 43 students went missing.

Body of Priest Found During Search for Missing Mexican Students
Protests, which have seen demonstrators attacking government buildings and blocking traffic, have been ongoing in Mexico since the students disappeared. Nevertheless, the country's president Enrique Pena Nieto has denounced the protests as being in the interests of those who wish to destabilize the situation in the country. He also claimed that the demonstrations were mostly aimed at preventing the national project on boosting economic growth launched by his government.

The #UStired2 is a group aimed at attracting public attention to the inefficiency and negative impact of the Plan Mexico, created under George W. Bush in 2007. The plan authorized the United States to give millions of dollars to Mexico to support the security forces in fighting drug trafficking and ending violence. According to #UStired2, despite massive spending, the plan has failed to stop the flow of drugs into the US, as well as violent gangland activity in Mexico and "has instead supported a corrupt government using the drug war as cover for a war on its own people."

http://t.co/FZlBfVU9zH December 3rd National Mobilization for Peace in Mexico in 43 cities—1 for each disappeared student in #Ayotzinapa