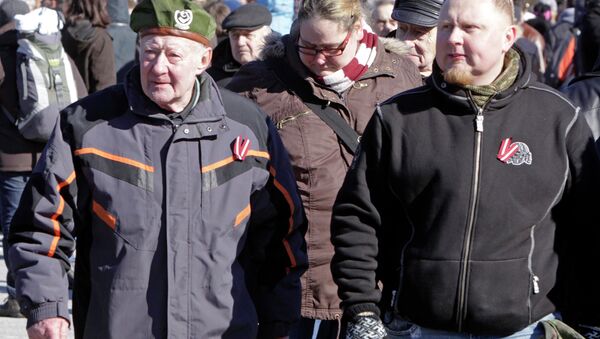 © Sputnik / Oksana Dzhadan
/
Go to the photo bank
Subscribe
The US House of Representatives has unanimously passed a bill to deprive Nazis of their US Social Security benefit payments, as there is a loophole in current law.

WASHINGTON, December 3 (Sputnik) – The US House of Representatives has passed a bill to bar Nazi war criminals from receiving US Social Security benefit payments, the House's presiding speaker said Tuesday.

US House of Representatives to Vote on Bill Eliminating Nazis Benefits

“On this vote the aye are 420, the nays are zero, two thirds being in the affirmative… the bill is passed without objection,” the speaker announced.

In order to become law, the bill also known as “No Social Security for Nazis Act,” has to pass in the Senate and be signed by US President Barack Obama.

“The Social Security is an earned benefit… It was never intended for those, who participated in horrific acts of the Holocaust… We will put an end to this loophole,” a leading bill sponsor, Ways and Means Security Subcommittee Chairman Sam Johnson said before the vote.

The bill was cosponsored by over 47 members of Congress.

One of the bill initiators, Subcommittee Ranking Member Xavier Becerra called on the positive vote by saying, “Congress never intended for the perpetrators of the Holocaust to enter the US let alone to participate in Social Security… We must act quickly in closing the loophole now.”

On November 19, US bipartisan lawmakers introduced legislation to terminate Social Security benefits for Nazi war criminals who receive them because of a loophole in current law.