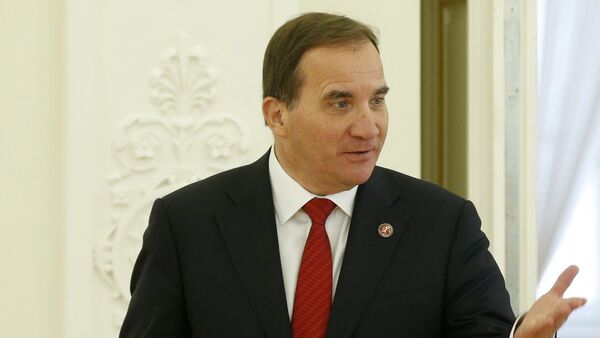 © East News / AP
Subscribe
The Swedish Prime Minister has called for an emergency meeting of all blocks late Tuesday to cooperate on the country's budget, disapproved by the right-wing Democratic party.

"I am ready to cooperate across blocs to solve this situation," the minister told reporters as he announced an emergency night meeting to discuss the country's budget.

Earlier on Tuesday, the Sweden Democrats party announced that it would reject the budged, proposed by the Swedish minority center-left government in a vote scheduled for Wednesday.

If they instead choose to back a rival budget proposed by the Alliance, a Swedish center-right political bloc, the government will be left with the minority of votes, a scenario that could ultimately lead to the announcement of snap elections just two months after members of the new Swedish cabinet assumed their positions.

Addressing the decision in a column for Swedish broadcaster SVT, the Sweden Democrats' deputy head Mattias Karlsson stated earlier in the day that his party would reject any government or budget that worked to increase immigration.

Following SD’s announcement, Lofven vowed to resign if the Alliance’s budget wins, stating that “it is out of the question that I would sit here and manage it. This will not happen.”

SD currently holds 49 of the 349 seats in Sweden's parliament, the Riksdag, and is not part of any political alliance. The remaining parties in Sweden’s parliament have repeatedly ruled out cooperation with the Sweden Democrats.

Sweden's current government is made up of two parties, the Social Democrats and the environmentalist Green Party, and is backed by some 39,5 percent of seats in the parliament.