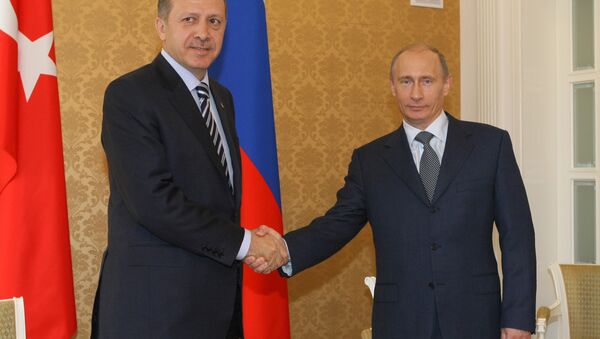 © Alexey Nikolsky
/
Go to the photo bank
Subscribe
Despite disagreement on Syria and Ukraine, Russia and Turkey are deepening partnership in fields of energy and bilateral trade. Cancelling the South Stream project, Russia has agreed to increase gas supplies to Turkey, whereas Ankara is going to boost its agriculture export to Moscow.

Gazprom Plans to Build New Black Sea Gas Pipeline to Turkey: CEO
MOSCOW, December 2 (Sputnik) — Russia and Turkey may be divided on some foreign policy issues, especially on Ukraine and Syria, but Russian President Vladimir Putin and his Turkish counterpart Recep Tayyip Erdogan have instead opted to focus on areas of mutual interest during their meeting in Ankara on Monday.

Deepening cooperation, especially in the energy sphere, is a dominant trend in bilateral relations, and has been reinforced following Russia’s decision to scrap the South Stream pipeline project. The initiative was aimed at transporting Russian gas to Europe, bypassing Ukraine. However, it has been dropped since the European Union was opposed to it.

"We will advance to other markets and Europe will not receive these volumes, at least from Russia," Vladimir Putin said at a joint press conference with Erdogan.

Putin:Russia Cannot Continue South Stream Construction in Current Situation
When it comes to energy cooperation Turkey is an obvious choice for Moscow. Russia, Turkey’s main energy supplier, has agreed to increase gas exports to Ankara by 3 billion cubic meters annually, also offering to build an additional energy hub in Turkey on the border with Greece for gas consumers in Southern Europe. Moreover, Russia has decided to offer Turkey a 6 percent discount from 2015 onwards.

Alexei Miller, CEO of Russia’s gas giant Gazprom, has announced that the two countries have considered building a new offshore pipeline, which will connect Russia and Turkey. At this stage it is unclear whether the project will be implemented. Reuters quoted Russian Energy Minister Alexander Novak as saying that "energy ministers and companies (on both sides) were ordered to look into these proposals in detail… It is hard to assess the costs, financial mechanisms, terms of fulfilment for now."

Russia and Turkey enjoy deepening economic and trade ties. Both countries have pledged to increase bilateral trade from $33 billion to $100 billion by 2020. Additionally, Moscow will invest $20 billion in constructing the Akkuyu nuclear power plant, the first such project in Turkey. Furthermore, millions of Russian tourists visit Turkey annually taking advantage of a visa-free regime.

"Turkey-Russia relations remain stable, maintaining continuity and not depending on the current situation," Putin told Anadolu news agency ahead of his visit to Turkey, as quoted by AFP. "Naturally our positions on some issues may not be exactly the same or even differ. This is natural for states carrying out an independent foreign policy," he stressed.

Major differences between the two countries involve Syria and Ukraine. Turkey blames Syrian President Bashar al-Assad for the ongoing civil war, stressing the four-year long crisis will only be resolved if he steps down. Russia, on the other hand, believes lasting settlement cannot be achieved without Assad. Additionally, Turkey has been critical of Crimea’s reunification with Russia.

Western countries will likely be opposed to Turkey’s deepening ties with Russia, considering the country is a member of NATO and has long tried to join the European Union. However, they have no say in the matter. At the same time, Ankara and Moscow have apparently agreed that mutual benefits from increased cooperation outweigh their differences.