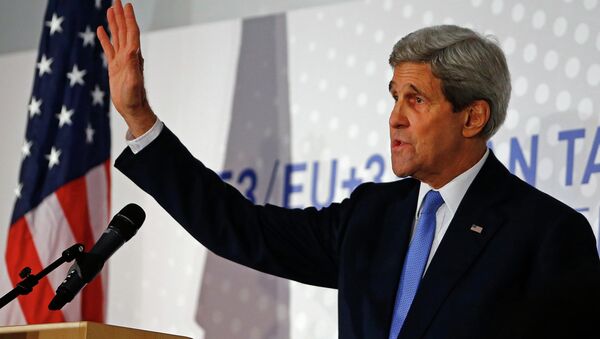 The US Secretary of State wants to discuss expanding sanctions against Russia over the Ukrainian conflict at a NATO foreign ministers meeting in Brussels.

The United States and the European Union have both imposed sanctions on Russia's financial, defense and energy sectors over Moscow's annexation of Crimea and its support for separatists in eastern Ukraine.

"There are continuing conversations with the EU about continuing to expand sanctions," said a senior US State Department official accompanying Kerry to a NATO foreign ministers meeting in Brussels on Tuesday.

"We will be having those conversations about where we go next, particularly in response to the continued supply of heavy weapons coming across the [Russian] border," said an official.

Dutch Companies Demand Compensation for Losses Over Anti-Russia Sanctions
The EU is not so eager to impose further sanctions against Russia, as they fear that the sanctions could hurt their own economies. Russia is Europe's leading energy supplier and EU diplomats say that more sanctions should not be imposed unless the current situation in Ukraine deteriorates further.

As was noted by the BBC earlier, the EU does much more business with Russia than the US does. EU's trade with Russia was worth nearly 270bn euros in 2012, significantly greater than the value of US-Russia trade.

"Our role is also to explore ways for dialogue with Russia," EU's foreign policy chief Federica Mogherini told Reuters at NATO when asked about the possibility of new sanctions.

Washington was willing to stop the sanctions if Russia met its promises under the Minsk ceasefire accord, said a US official. He further stated that the combination of sanctions, low oil prices and general mismanagement are having "an intense effect" on Russia's economy. "You can see it in the billions that they have had to spend defending a Rouble that continues to fall. You see it in the high rates of inflation inside the country."

New EU Sanctions Show West Unwilling to Stabilize Situation in Ukraine: DPR
In response to the sanctions, Russia had banned the import of agricultural products back in September, which has hurt EU trade. The BBC noted that food exporters faced immediate losses after Russia announced the embargo on a wide range of food imported from the EU, US, Norway, Canada and Australia. Fresh fruit and vegetables, meat, dairy produce and various other foods were affected by the Russian ban, which was said to last at least a year.
Newsfeed
0
Access to the chat has been blocked for violating the rules . You will be able to participate again through:∞. If you do not agree with the blocking, please use the feedback form
The discussion is closed. You can participate in the discussion within 24 hours after the publication of the article.
To participate in the discussion
log in or register
loader
Chats
Заголовок открываемого материала