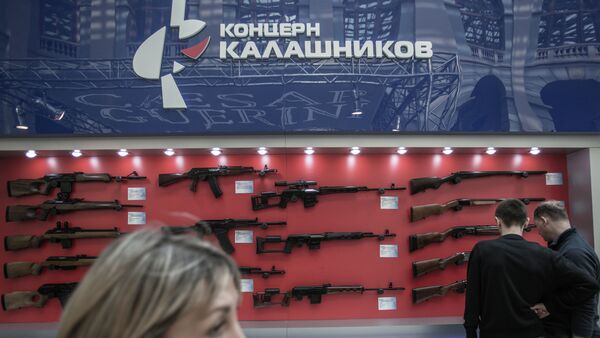 © Sputnik / Andrei Stenin
/
Go to the photo bank
Subscribe
On Tuesday Kalashnikov Concern will present its development strategy until 2020 and a new brand for the product line, a spokesperson for Russian state technologies corporation Rostec said.

"On Tuesday, December 2, Kalashnikov Concern will present its development strategy until 2020 and a new brand for the product line," a spokesperson for Russian state technologies corporation Rostec told RIA Novosti.

The representatives of Kalashnikov Concern explained the need for rebranding, saying, "It is impossible to compete with global arms industry leaders without a strong, recognizable brand."

According to the company's press service, the company now has a number of product lines not related to one another. "As a result there is no system of brands and the customer does not get a feeling of unity."

According to Rostec, "changes will affect the visual image of the concern's brand and the structure of the entire product line currently in production."

The creation of the new brand was financed by the company from its own funds, without raising any money from the government.

Kalashnikov to Adjust Export Strategy Due to Western Sanctions
Kalashnikov Concern was created in 2013 on the basis of the Izhmash and Izhmekh plants. It is now Russia's largest producer of automatic and sniper rifles, guided artillery shells as well as a wide range of civilian products, including shotguns, sport rifles and machine tools. The products manufactured by the company are exported to 27 countries, including the United States, United Kingdom, Germany, Norway, Italy, Canada, Kazakhstan and Thailand. In November, Russian state arms exporter Rosoboronexport announced that it had signed a contract with Indonesia for the trial supply of the AK-100 Kalashnikov assault rifle.

Recently the company submitted an application for its right to use 3D images of its AK-47, AK-74 and AKM assault rifles. After the registration is completed, the use of images of Kalashnikov rifles for souvenirs and in video games without the company's permission will be illegal.