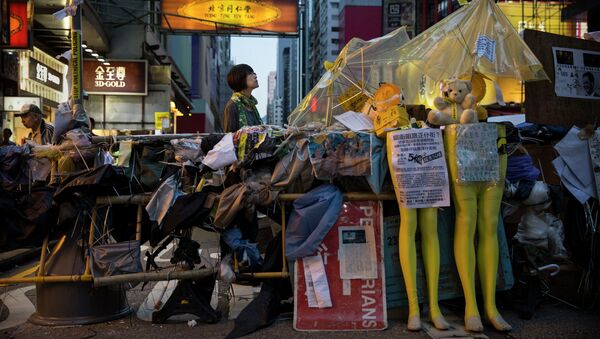 © Fotobank.ru/Getty Images
Subscribe
Three leaders of the Occupy Central with Love and Peace movement, which along with several student organizations spearheaded protests in Hong Kong, have announced that they will “surrender” to police and urged participants of the movement to retreat and transform the protest campaign.

MOSCOW, December 2 (Sputnik) — Three leaders of the Occupy Central with Love and Peace movement, which along with several student organizations spearheaded protests in Hong Kong, have announced that they “surrender” and are preparing to turn themselves in to police on Wednesday, AFP reports.

BT — we don't know what will happen after we hand ourselves in, whether detained or released, but we are prepared for the consequences

They also urged participants of the movement to retreat and transform the protest campaign. "As we prepare to surrender, we three urge the students to retreat — to put down deep roots in the community and transform the movement," said Occupy Central leader Benny Tai, a law professor at the University of Hong Kong, during a press conference. Chan Kin-man, a professor of sociology at Chinese University, and Reverend Chu Yiu-ming were also present.

Benny Tai — for the sake of the safety of occupiers, we urge the students to retreat and take spirit of #umhk into the community

BT — we are not abandoning the occupiers,we are urging them to understand the fight for democracy is a long one & we need energy to fight on

The leaders stressed that surrendering “is not an act of cowardice” in a tweet posted on the movement’s official account. “[I]t is courage to bear responsibility,” they said, adding it “is not failure but denunciation of heartless government”.

OCLP — surrender is not an act of cowardice, it is courage to bear responsibility, is not failure but denunciation of heartless government

On Monday, the headquarters of Hong Kong’s government was temporarily closed after thousands of pro-democracy protesters and police clashed near the Admiralty Centre. This weekend saw some of the bitterest violence in China’s semi-autonomous region since protests started in late September.
The protests were sparked by Beijing’s decision to vet candidates, who will participate in the election for Hong Kong’s chief executive, scheduled for 2017. Activists claim it is an infringement on democracy. Hong Kong, which became part of China on July 1, 1997, is governed according to a "one country, two systems" principle, meaning the 7-million region enjoys wide autonomy in all areas except foreign relations and defense.