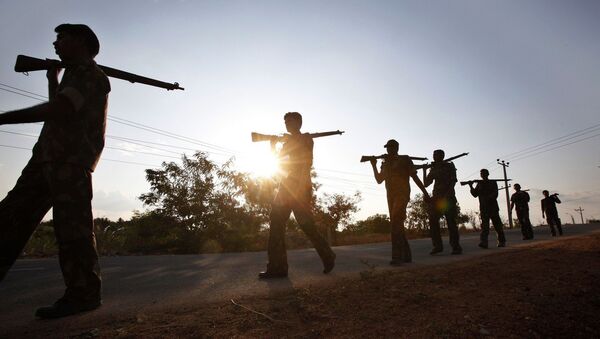 "Thirteen security forces were killed in a gunbattle with Maoists in a deep forest of Sukma region of Chhattisgarh," stated Rajinder Kumar Vij, as quoted by AFP. CRPF’s deputy commandant and an assistant commandant are among the deceased, according to the Indian Express.  12 police officers have also been injured, as reported by AFP.

The assailants have allegedly used local villagers as human shields, AFP reports, citing Zulfikar Hasan, CRPF’s head of operations in the region. "The Naxals were using local villagers as shields, hence our force couldn’t retaliate with full force as that would also have cost villagers' lives," Zulfikar Hasan told the news agency, referring to Maoist rebels. Hasan has confirmed the number of deceased and injured officers. He added that the CRPF operation in the area is still ongoing.

Rajnath Singh, India’s Union Minister of Home Affairs, has tweeted he is "[d]eeply saddened and disturbed to know of 13 CRPF men" killed by the rebels. He referred to the attack as a “dastardly act of violence” and has offered his condolences to the relatives of those killed by the rebels.

Deeply saddened and disturbed to know of 13 CRPF men being killed by the Naxals during an ongoing encounter in Chhattisgarh.

It is an act of cowardice. I strongly condemn this dastardly act of violence.

I express my condolences to the families of our brave CRPF men who sacrificed their lives in the line of duty.

The Maoist insurgency dates back to late 1960s. The rebels, banned in India, are striving to overthrow the country’s government in order to establish a communist society.