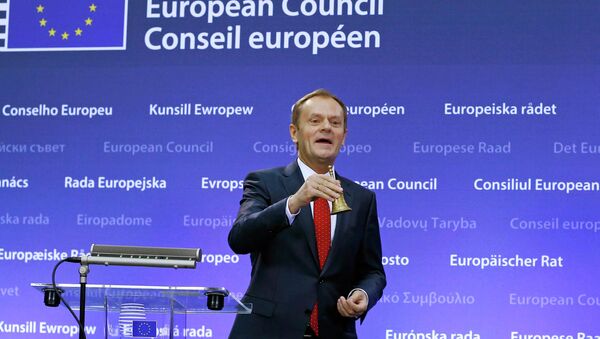 Relations between Europe and the US are the backbone of the community of democracies, former Polish Prime Minister Donald Tusk said taking over the European Council presidency from Herman Van Rompuy on Monday.

"I come here with a strong sense of purpose. In these difficult times Europe needs success. To me, this means four things," Donald Tusk said on his Twitter account. "First, protecting our fundamental values, freedom and solidarity, against threats to the EU & its unity- both from inside & outside."

He added that it was time to end the economic crisis with "ruthless determination" and secure European borders, supporting those neighboring countries that share the EU values.

Visit of EU Foreign Policy Chief Mogherini to Moscow Not Discussed Yet
"Relations between Europe & the United States are the backbone of the community of democracies. The year ahead will be crucial," the council president concluded.

EU Foreign Policy Chief Federica Mogherini welcomed Tusk, saying she was "looking forward to working together with our new @eucopresident".

On his first day as president, Tusk also thanked his predecessor, Van Rompuy, calling him the personification of such crucial principles as trust, common sense, moderation and decency.

Rompuy Confirms Stepping Down as European Council President on December 1

In early November, Van Rompuy, who occupied the post of the European Council president from December 1, 2009, said he would be stepping down on December 1, 2014. The new president, Donald Tusk, previously served as the Polish prime minister from 2007 to 2014.