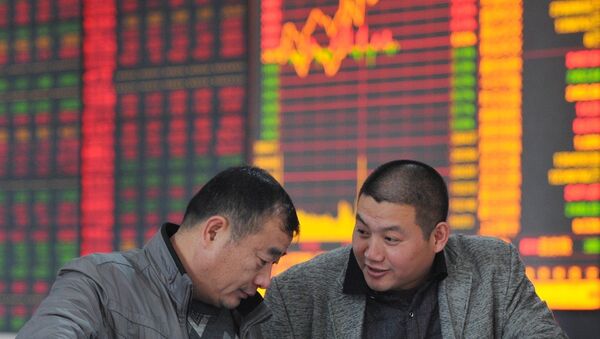 Stock Markets worldwide suffered losses today as oil and other commodities depreciated on the recent OPEC decision to not cut production and China’s manufacturing activity nearing a halt; while across the ocean, Americans are spending less before Christmas.

OPEC Refusal to Fix Prices Signals New Oil Era
Today’s retreat in global equities started in Asia-Pacific stocks, on the news from the United States, that the holiday wholesale season, started last Friday, saw a sudden stall in consumer demand, as sales dropped 11% during the weekend, with about 6 mln buyers abstaining from purchasing. According to the National Retail Federation data, total spending during the first three days of the massive holiday sales reached only $50.9 bln, an 11% drop year-on-year, while on average shoppers spent $380.95, 6.4% less than a year ago. Most of consumer goods sold in America are made in Asia, thus the disappointing US data dragged Asia-Pacific stocks down.

Hong Kong’s Hang Seng saw a slide of 2.6%, led by the mainland, primarily, manufacturing sector stocks, which fell 2.9%, as evidenced by Bloomberg data. The Shanghai Composite slid only 0.1% after a straight week of gains, as international investors sold part of their recently acquired mainland assets via the Stock Connect. Australia’s S&P/ASX 200 also fell by 2%, as it lists many mainland China-based enterprises. Energy shares plunged a massive 15%, a record since 2008 on oil and commodities retreat.

Mid-eastern equities, usually stable, fell dramatically today, Dubai’s General has lost 2.1%, in line with the 4.7% drop yesterday. Saudi Arabia's main index, the Tadawul, went flat after a massive drop of 4.8% the day before, a three-year record.  The main reason behind these losses is dramatically decreasing oil prices. Oil may be heading for a stable price of $40 a barrel as the global market for ‘black gold’ is undergoing significant changes. The main reason behind the oil slump is the ‘price war’ between the US and Saudi Arabia, in an attempt to win a larger share of the world market.

“This is a big shock in Caracas, it’s a shock in Tehran, it’s a shock in Abuja,” Daniel Yergin of IHS Inc. told Bloomberg. “There’s a change in psychology. There’s going to be a higher degree of uncertainty.”

US-Saudi Oil Price War Takes Toll on Nigeria
Only a few major oil-producing nations can manage a lower oil price, including Saudi Arabia, UAE and Qatar. Oil reserves and export revenues in these countries far exceed the volumes of necessary spending and debt, at least for a while. Whereas Iran, Iraq, Nigeria, Venezuela, Algeria and Angola are all experiencing heavy demographic pressures, some of these nations have excessive foreign debt, and their economies are far from being properly diversified. Russia is a separate case, with oil and gas comprising 68% of total exports and 50% of the nation’s federal budget. Russia’s fiscal policy, of pursuing a sound budget, has triggered a 31% depreciation of the ruble against the dollar since June. However, in a prolonged period of cheaper oil, Russia’s economy may adjust and stay afloat after significant financial losses.

Bank of Japan Promises More Asset Buying Amid Internal Opposition
Of Asia’s markets only Japan has shown some growth today, with the Nikkei adding 0.75% on a weakened yen. With the national currency down to 119.03 against the dollar, Japan’s big business have a better chance to boost exports, which triggered a rally in shares of Toyota Motor Corp. and Canon Inc. Topix index added 0.8% on the news. Also, a weaker yen fuels hopes for higher inflation in Japan.

In Europe, the Stoxx Europe 600 Index retreated 0.5%, the all-Europeans FTSEurofirst 300 slid 0.7% on poor China’s manufacturing PMI data. China’s November PMI dropped to an 8-months low of 50.3 in November, compared to October’s 50.8, according to Reuters. PMI, the Purchasing Managers’ Index, indicates growth if higher than 50, while below 50 means contraction.

"There's downward pressure on many commodities. That is a function of disappointing global growth and especially the slowdown in China," Wouter Sturkenboom of Russell Investments said of the European markets as quoted by Reuters. "That is negative for equities," he added.