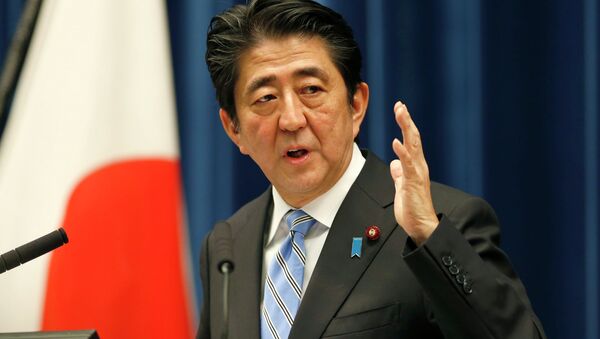 During a meeting with the mayor of the city of Nemuro in the Hokkaido prefecture, Japanese Prime Minister Shinzo Abe said that he aims to settle the problem of the Northern Territories and sign a peace treaty with Moscow.

TOKYO, December 1 (Sputnik) — Prime Minister of Japan Shinzo Abe said Monday he is determined to settle the country's territorial dispute with Russia and sign a peace treaty at all costs, Kyodo News has reported.

During a meeting with the mayor of the city of Nemuro in the Hokkaido prefecture, Abe said that he aims to settle the problem of the Northern Territories (the Japanese name for the Kuril islands) and sign a peace treaty with Moscow.

“My mission as a politician, as a prime minister is to achieve it [a peace treaty] whatever it takes,” Abe said, as quoted by Kyodo.

The mayor of Nemuro, the closest city to the disputed islands, Shunsuke Hasegawa expressed hope that Abe would succeed in resolving the territorial dispute with Russia during his term as a prime minister.

In November, Hasegawa said the talks on the issue may advance next year, during Russian President Vladimir Putin's planned visit to Japan.

Russia and Japan failed to sign a permanent peace treaty following the end of the World War II. The sides have failed to resolve a dispute over four islands in the Sea of Okhotsk, called the Southern Kurils by Russia and the Northern Territories by Japan. The disputed islands — Iturup, Kunashir, Shikotan and Habomai — are currently administered by Russia, but still claimed by Japan.