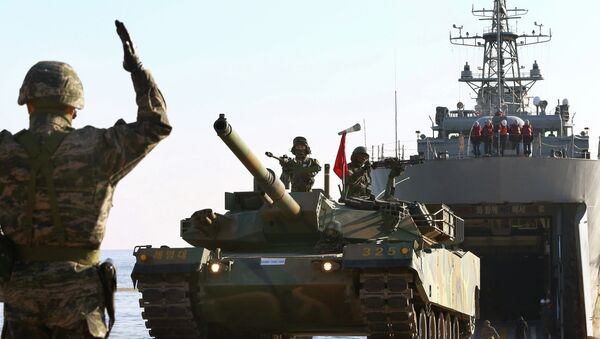 © REUTERS / Kim Jun-beoml
Subscribe
The North Korean government called US plans to shuttle US troops stationed in Japan to the Korean Peninsula in the event of a conflict a sign of US ambitions to invade the communist country, Yonhap News Agency reported.

North Korea Says Ferguson Protests Expose True Human Rights Situation in US
MOSCOW, November 30 (Sputnik) — The North Korean government condemned the US on Sunday, calling US plans to send American troops stationed in Japan to the Korean Peninsula in the event of war a sign of Washington’s ambitions to invade the country, Yonhap News Agency reports.

“The US intention is to crush North Korea with military power and stage a second war on the Korean Peninsula,” a statement in the Rodong Sinmun, the organ of North Korea’s ruling Workers’ Party of Korea, noted, as cited by Yonhap.

The statement added that North Korea’s military forces would “devastate” US bases in Japan should the forces make a move, stating that the country would step up its efforts toward a nuclear deterrent. “We are fully prepared for all scenarios and [will] ramp up our nuclear deterrence, which will become a reality before long,” the statement said.

Earlier this month, the US had officially confirmed that US military forces in Japan would automatically intervene to fulfil their obligations to South Korea in the event of a military conflict on the Korean Peninsula, adding that the US was free to make such a decision without prior consultation with the Japanese government.

The confirmation came following a request for clarification on the issue by the South Korean government. Japanese Prime Minister Shinzo Abe had said in July that the US Forces Japan (USFJ) contingent would need to consult with Tokyo first before sending its forces to Korea, The Korean Times had earlier explained.

South Korea Runs Live-Fire Exercise Despite Pyongyang Warnings: Reports
Yonhap believes that the North Korean statement is a signal from the North Korean leadership that it intends to conduct another nuclear test in the near future, despite South Korean Defense Minister Han Min-koo’s statement earlier this month that the country appear to be ready to do so.

The US has 36,000 troops stationed in Japan, along with 28,500 in South Korea, the latter purportedly meant to serve as a deterrent to North Korean aggression. According to the UK-based International Institute for Strategic Studies, North Korea’s army maintains approximately 1.1 million active duty personnel, as well as approximately 8.2 million reserve personnel. Combined with South Korea's 655,000-strong army, plus 4.5 million reserves, this makes the Korean Peninsula one of the most highly militarized territories in the world.