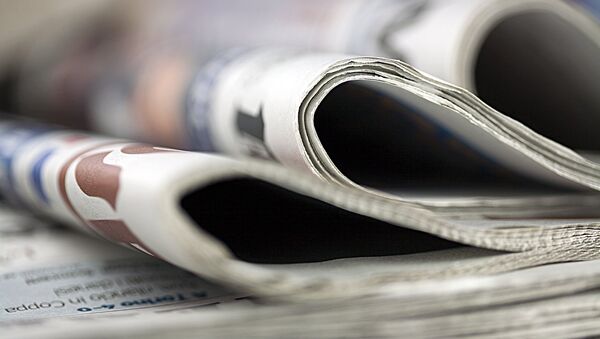 Alexander Mercouris
London-based lawyer
All materials
Western attacks on Russian media vary from the abusive to the merely sarcastic, but what all of them have in common is the attempt to define the English language Russian media as a “propaganda instrument” of the Russian government.

Europe Portrays Russia as 'Scarecrow' Over Ukrainian Crisis: Lawmaker
LONDON, November 30 (Sputnik) — The Ukrainian crisis has triggered an extraordinary series of attacks on the English language Russian media by the Western media. Here in Britain, where I write, hardly a day has passed in the past few weeks without the Russian media coming in for some sort of attack.

These attacks vary from the abusive to the merely sarcastic, but what all of them have in common is the attempt to define the English language Russian media as a “propaganda instrument” of the Russian government (always portentously called “the Kremlin”).

The primary target is the Russian media’s coverage of the Ukrainian crisis. US Secretary of State John Kerry has even called RT a “propaganda bullhorn” because of it.

Russia Needs to Speak out Despite European Media Blockade: European Party
There are many ways to define “propaganda”, but most people would agree that it involves disseminating information in a way that is misleading and biased so as to influence opinion in a particular way. Doing so can involve an element of outright lying, but in my experience the most common and effective way is to omit or minimise important facts so as to make a correct understanding of an issue or situation impossible.

When these criteria are applied to the Ukrainian crisis it becomes clear that the Western media have been far more guilty of what might be called “propaganda” than the Russian media they criticize.

To illustrate how, here is a list of what I consider nine important facts about the Ukrainian crisis, which the western media has either omitted reporting or has wrongly downplayed:

Russia Hopes Nazi Symbols Used by Ukraine Nat'l Guard to Get Appropriate Int'l Assessment
1. The involvement of neo-Nazi and far-right groups in the Maidan protests, the February coup and the subsequent civil war.

The Western media consistently tries to minimize the role of these groups, claiming that they are marginal and pointing to the low percentage of votes they win in elections. The latter point is however relevant to the level of their support in Ukrainian society, not to their role in the Maidan protests, in the coup and in the events that have happened in Ukraine since the coup.

More appropriate reporting of these groups and of their role in the conflict would have reported for example on the fact that the so-called “Maidan Commandant”, Andrey Parubiy, who was responsible for security at the Maidan protests and who played a key role in the February coup, has a long, well-established history in far Right Ukrainian politics. It would also have reported that following the coup and during the civil war Parubiy actually headed Ukraine’s National Security Council and was instrumental in setting up Ukraine’s National Guard, which has played a key role (and very controversial role) in the civil war.

More appropriate reporting would also have reported on the far-right affiliations of the “volunteer battalions” (complete with their Nazi insignia) that have taken part in the civil war with the Ukrainian government’s encouragement. It would also have reported the freedom given to the violent far-right group known as Right Sector (also heavily involved in the Maidan protests and in the coup) to carry out its activities throughout Ukraine and the alarming and frankly racist and on occasion even genocidal language used about Russia and Russians by various Ukrainian politicians, even when they are not formally aligned with violent far-right groups.

More appropriate reporting would also question why supposedly democratic protesters and political leaders in Ukraine have associated themselves so closely with such groups both during and after the Maidan protests and have even formed coalitions with them giving their leaders official posts in the new government.

Council of Europe Overseeing Investigation of Maidan, Odessa Events
2. The violence that happened in and around Maidan especially after January 19, 2014, and also in provincial towns and cities during the protests.

Whilst this was reported by the Western media it was done in a most incredible way, showing extreme sympathy for the protesters despite the extraordinary extent of the rioting and despite the repeated storming of public buildings and the violence used towards the police during the protests. Little attention was given to the use of firearms and other weapons by some of the protesters. To the extent that the violence was criticized at all, it was blamed on the previous government and on the police, despite the overwhelming evidence (seized buildings, deaths of police officers etc) that most of it was the work of the protesters.

3. The uncertainty about who was responsible for the killings by snipers in the last few days of the Maidan protests.

The Western media have largely failed to report the growing doubts about who was really responsible for these killings and has hardly reported the failure of the official inquiries into this question. The whole subject of these killings has now stopped being discussed in mainstream newspapers and on television.

American Media Severely Distort Information About Ukrainian Crisis
4. The unconstitutional nature of the coup, which took place on February 22, 2014.

Western media have largely failed to report that Yanukovych’s ouster from the Presidency was carried out unconstitutionally in a manner that clearly violated the Ukrainian constitution and law, which set out a clear set of circumstances and a clear sequence of steps needed to remove a President from office, which however were completely disregarded when the coup took place. As is the case with the snipers, as time has passed the western media has largely stopped mentioning the coup even though it is the central event of the whole conflict. Recent articles in the British media that discuss the situation in Ukraine no longer mention it, preferring instead to dwell on the supposed misdeeds of the Russian government.

5. The Ukrainian government’s failure to engage its opponents in constitutional negotiations despite the repeated commitments it has made to do so including the agreement of  February 21, 2014, the Geneva Statement of April 17, 2014, and the Minsk Protocol of  September 5, 2014.

The Western media has completely ignored this issue, focusing instead on Russia, and ignoring the fact that the conflict is in reality an internal Ukrainian one caused by the refusal of the Maidan movement to negotiate with its opponents or to look for compromise.

The Western media downplayed the tragedy of the Odessa fire from the outset. It has now stopped discussing it, despite the scale and horror of the tragedy and the key role it played in turning the people of the eastern Ukraine against the government and in causing the war there. The fact that the government’s investigation into the fire has basically failed has gone almost completely unreported.

7. The encirclement and defeat of a large section of the Ukrainian army in the so-called “Southern Cauldron” in mid July 2014.

The Western media completely failed to report this key battle, which changed the entire course of the war. Instead it preferred to report a string of fictitious victories supposedly won by the Ukrainian army as claimed by the government in Kiev.

Instead of doing this, throughout July and early August, the western media reported the war as if the Ukrainian government was winning it. The BBC, in a particularly shocking example of western media misreporting of the conflict, persisted in providing on its website a situation map that became more and more detached from reality as each week passed.

As a result, when the Ukrainian army eventually suffered its collapse in the final weeks of August, the only way the western media and the BBC could explain this fact was by claiming the existence of a Russian offensive that never in fact happened and of which there was no evidence that it ever took place.

Russia Opens Criminal Case Into Shelling of Hospital, Buildings in Donetsk
8. The Ukrainian army’s shelling and bombing of populated centres, its siege of populated centres and its use of ballistic missiles and of weapons like cluster bombs and phosphorus.

All this has now been largely confirmed by agencies such as the OSCE, the UNHCR, the ICRC and, though very grudgingly, by some western human rights agencies.

The western media however has still largely failed to report this in a way that stands in striking contrast to the way it has reported the government’s actions in (say) the Syrian conflict.

By failing to do so the western media is making it impossible for the western public to gain a true sense of the scale and character of the war and of the enormous physical devastation it has caused. It also makes it impossible to understand the bitterness that will be the abiding legacy of this war.

Russia Concerned by MH17 Probe Delays, Lavrov Tells Kerry
9. The presence in the conflict zone of several BUK missile launch systems controlled by the Ukrainian military on the day MH17 was shot down.
The western media has barely reported this fact of which most westerners in my experience are wholly unaware.

This is an extraordinary failure given the immense international outcry caused by the shooting down of MH17.

The presence of Ukrainian BUK missile systems has been conclusively proved by the publication of Russian satellite imagery. The Ukrainian government denied their presence and sought to refute the evidence provided by the imagery. Their attempts to do so however were so unconvincing that they served rather to prove the presence of these BUK missile systems rather than refute it.

I would suggest that without knowledge of these nine facts a proper understanding of the Ukrainian conflict is simply impossible. By failing to report them, or by wrongly downplaying them, the western media is giving the western public an essentially false picture of the conflict.

Instead, for the first time in its long history, the Western media finds itself in a position where it is not only giving an account of a conflict which is false (that has happened many times), but also finds itself effectively challenged by a powerful alternative media, which is giving an account of the conflict which is true. Since in any conflict between truth and falsehood, it is truth that always has the advantage, the western media for the first time in its experience finds itself on the defensive, sensing that its own credibility is now on the line. It doesn’t like this situation at all, which is why it is lashing out in the way it is doing.

That in Britain the media is failing to convince is shown by a single remarkable fact – the astonishing lack of published opinion polls showing the public’s take on the conflict. Such evidence has always in the past been produced in great quantity during conflicts of this sort. Almost invariably it has shown wide acceptance of the account of the conflict provided by the British media and strong support for the official line taken by the British government and by other Western governments. That this evidence is not being provided on anything remotely like the same scale on this occasion, despite the way the conflict is being reported as a revival of the Cold War, is extremely telling. Arguments from silence should generally be avoided, but in this case the silence is so deafening that it speaks louder than a thousand words.