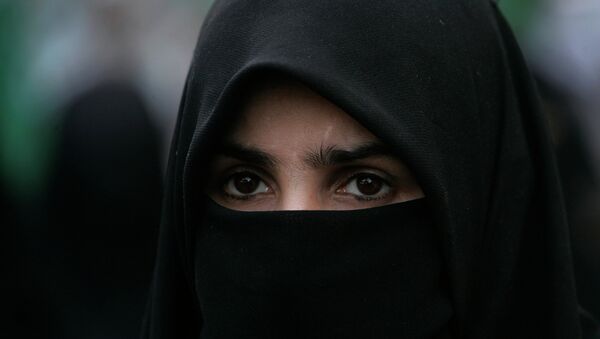 © AP Photo / Shakil Adil
Subscribe
Youthful romanticism, a powerful social media propaganda campaign, and the desire to escape the mundane ordinariness of life in the West have resulted in a number of Muslim women living in Western countries travelling to territories controlled by the Islamic State (IS), leaving experts struggling to explain their motivations.

MOSCOW, November 30 (Sputnik) — Last week, German security service head Hans-Georg Maassen told NBC News that the number of German and other Western Women travelling to IS-controlled territories has “increased significantly” over the last few months, especially in comparison to the movement of women to other Middle Eastern warzones in the past. Maassen noted that “romantic blindness” is to blame for the women’s decisions to leave their homes “to become the second or third wife” of an Islamist fighter.

Discussing the security implications, which include the possibility of women coming back to the West to join terrorist cells, a tactic once commonly used by Chechen Islamic militants, Maasen noted that it’s not clear "whether they would be willing to commit an attack here or if they only see themselves in the role of a supporting Islamic wife."

Canadian authorities dealing with the issue recently asked think tanks to delve into the motivations of the young women, including the process in which they are radicalized, the proportion of women supporting and actively involved in terrorist groups, and the security challenges their recruitment poses, the National Post explained earlier this month.

Abbee Corb of the Institute for Radicalization & Security Studies noted in the National Post article that Islamic State is actively “recruiting in Canada” and “that they are looking specifically for girls.” IS seeks in particular those “that can express themselves, ones that are visibly pleasing because they want to use them to entice young boys to join,” Corb explained.

Austrian anti-extremists experts, also struggling with the problem, have explained some of the difficulties. Jihadism expert Moussa Al-Hassan Diaw told Public Radio International that even efforts designed to counter rising radicalism may only serve to heighten it: “You take people like a girl who starts to wear the headscarf, or another starts to pray. And you say ‘well, this could be a sign of radicalization.’ That’s really a problem, because if you want to de-radicalize, you can’t pick people out from the classroom and bring them to the police because this would radicalize them,” he said.

Sasha Havlicek of the London-based Institute of Strategic Dialogue explained in an article by the Washington Post that “given the choice of a fairly mundane life in a second tier job in the West, and this rather heroic and romantic image of jihadi life being portrayed by Islamic State propaganda, which is very well crafted, in a paradoxical way this gives women a sense of agency and empowerment.”

Melanie Smith of the King’s College International Centre for the Study of Radicalization told the Guardian that the young women were “going for adventure, just like the young men,” and that social media has played a key role in recruitment. She noted that while many women had hopes to go to the region to join their new-found loves in combat, The Islamic State’s conservative Salafi ideology has forced most to stay indoors and act as housewives and bear children “for the sake of Allah.”

Erin Marie Saltman from the counter-extremism think tank Quilliam explained in a piece by The Times that IS has been actively using women, including those who had already moved to IS-controlled territories, as a “tool of soft recruitment” similar to the kind of propaganda used in the First World War. There, “men were branded cowards if they did not enlist. Jihadist wives are using language to degrade the machismo of British [Muslim] men,” Saltman explained. “They use physical comparisons to shame the ‘fat and lazy British Muslims’ into joining the ‘physically fit and strong mujahidin’ in Syria and Iraq,” she added.

IS’s propaganda campaign also includes the social media prowess of women who have already relocated to live in the IS-controlled territories, who then give advice to their ‘sisters’ still living in the West, explaining the reasoning behind their decisions, the conditions on the ground in IS controlled lands, as well as advice to those who are planning to make the trip in the future. Earlier this month, the Daily Mail reported the story of Aqsa Mahmood, a British born Muslim who travelled to the conflict zone and has been tweeting on her experiences. Her family’s lawyer, noting the sadness and disappointment of her parents, was quoted by the Daily Mail as saying that “the best advice [her family] could offer Aqsa is to not offer any advice to young Muslims, to whom she is essentially offering a death sentence.”

A piece by Radio Free Europe last week examined the blogs of women who had gone to IS-controlled regions, revealing their trials and tribulations, as well as the deep radicalism that had apparently been instilled in them. Umm Khattab al-Britaniyyaa, a British woman married to a Swedish IS militant who had been killed in the fighting, noted in her blog that she was “very happy” for him after finding out that he had been killed, believing that he had become a Shaheed – a martyr and that he had gone to the Akhirah – the afterlife. The fascinating piece also revealed just how well-organized the IS effort is to bring foreigners who have been recruited onto their territories. Umm Khattab explained that the IS had attorneys helping to ensure that women travelling to the region arrived there, and that the militant group provided housing for the women, along with amenities such as cooking utensils and even monthly groceries.

Mia Bloom, a criminology Professor at the University of Massachussetts’ Lowell Center for Terrorism and Security Studies, discussed the phenomenon of recruiting young teachers in the article by PRI, noting that the tactics the group uses against teenagers are particularly despicable; she explained that when it comes to teens, the militant group is “using a combination of tricks and treats” in a manner “very similar to the way online predators recruit children.” She added that she sees it as “a kind of child abuse,” stating that in the case of teenagers, she hopes that “we treat them as victims and not as suspects,” PRI quoted her as saying.

It remains unclear exactly how authorities in various countries struggling with the phenomenon of ‘jihadi brides’ will deal with the women who decide to return from the IS territories in the future, given the vast variety of motivations, and the psychological, ideological and religious issues which surround this sensitive and unprecedented problem.