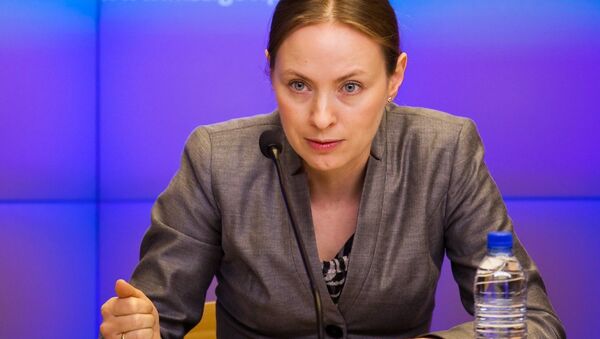 Polish Ambassador to Russia stated that the fulfillment of the Minsk agreements on the Ukrainian crisis settlement is the main condition for lifting the European Union's sanctions against Russia.

EU Likely to Lift Sanctions if Russia Respects Minsk Agreements: Chairman
MOSCOW, November 29 (Sputnik) — The fulfillment of the Minsk agreements on the Ukrainian crisis settlement is the main condition for easing the European Union's sanctions against Russia, the Polish Ambassador to Russia said in an interview with RIA Novosti Saturday.

"The question of sanctions lifting is predictable as the European Union repeatedly stated before that it will move in this direction if there are steps from the Russian side, that will lead to the problem's resolution. And the fulfillment of the Minsk protocol is what currently matters the most here," Katarzyna Pelczynska-Nalecz told RIA Novosti.

The Polish ambassador noted that no one views the sanctions as a positive thing.

"Sanctions are a last resort, [used] when all the other instruments are no longer working. And this is how the EU views sanctions, this is how Poland sees sanctions. But if all other mechanisms, political dialogue, fail, we have to turn to this instrument," Pelczynska-Nalecz said.

The ambassador added that the discussion about extending the sanctions has been going on in the EU in the last few weeks.

"The [EU] policy regarding the sanctions will depend on what will be going on in Ukraine and to which extent Russia will be violating international obligations and international law in its Ukrainian policy," the Polish diplomat said.

Pelczynska-Nalecz noted that Russian-Polish cooperation has been affected by the sanctions.

"Unfortunately the sanctions are certainly harming the cooperation, but still there are always a lot of opportunities for cooperation and [the Russian-Polish cooperation] still continues."

The European Union, the United States and a number of other countries imposed several rounds of sanctions on Russia over its alleged meddling in the Ukrainian conflict. Moscow has repeatedly denied its involvement in the crisis and responded to the sanctions, implementing a one-year ban on certain food imports from the West.

The ambassador noted that even though Polish exports as a whole did not decrease in the last months, certain Polish businesses, specifically focused on the Russian market, are experiencing serious problems due to the sanctions regime.

Moscow should make a speedy decision on returning to Poland the wreckage of a Tu-154 plane, which tragically crashed near the Russian city of Smolensk in April 2010, killing ex-Polish president Lech Kaczynski, Poland’s ambassador to Russia said in an interview with RIA Novosti.

“Next year, it will be five years since the catastrophe, but the plane, its remains, still have not been returned to Poland. There is no decision from the Russian side, nothing has been returned to the Polish side, and this is of a major symbolic significance for Polish nation,” Katarzyna Pełczyńska-Nałęcz said.

She added that the issue should be solved quickly, “because it negatively affects Polish citizens’ perception of Russia”.

The Russian-made Tu-154 passenger plane carrying Kaczynski, his wife and a number of high-ranking officials crashed in heavy fog as it attempted to land at an airfield near Smolensk on April 10, 2010. None of the 96 people aboard the plane survived.

Russia pledged to return the wreckage to Poland after an investigation by Russian and Polish officials that was initially scheduled for completion in April of 2014. In August, Warsaw decided to extend the probe, suspecting high-ranking Polish officials in inadequate preparation for the flight and Kaczynski's visit to Moscow, as well as in ensuring insufficient safety and security of the country's president.

Poland has the right to expel people, who pose a threat to the country's security, Poland's ambassador to Russia said in an interview with RIA Novosti Saturday.

"Each country has a right to accept or expel individuals. Often, such individuals are diplomats and rarely other people, who, according to the country's authorities, pose a threat to security of the state," Katarzyna Pelczynska-Nalecz said.

"And Poland also has such right and applies it very rarely to Russian or other individuals," the ambassador added commenting on the situation with Russian journalist Leonid Sviridov.

On October 24, Polish authorities announced they were going to cancel the residence permit of Sviridov, Rossiya Segodnya's freelance correspondent in Warsaw, failing to disclose the reason behind the decision.

The Russian Foreign Ministry has condemned Warsaw's decision and called it "outrageous."

The tit-for-tat expulsion of diplomats in Poland and Russia is not a scandal, Poland's ambassador to Russia said in an interview with RIA Novosti Saturday.

“It happens from time to time to diplomats. I would not call what happened a scandal by any measure. Of course, it [the mutual expulsion] is not a positive message but it was conducted in a civil manner with quite normal relations between the foreign ministries,” Katarzyna Pelczynska-Nalecz said.

Last week, the Russian Foreign Ministry announced that Moscow deported a number of Polish diplomats for violating the terms of their employment, a move that comes in response to Poland's deportation of Russian diplomats.

Poland earlier deported a number of Russian diplomats for the same reason.