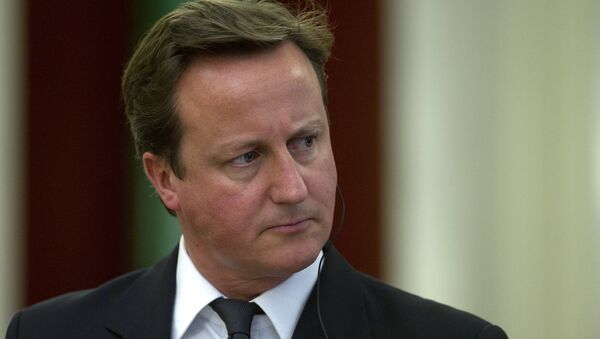 Liberal Democrat member of the British Parliament Mike Hancock stated that Prime Minister David Cameron is following a high risk strategy by threatening to lead Britain out of the European Union if other EU states don’t cut immigration to the United Kingdom.

Cameron to Cut Migration Levels in UK, Scrap Benefits for EU Jobseekers
MOSCOW, November 28 (Sputnik), Daria Chernyshova — UK Prime Minister David Cameron is following a high risk strategy by threatening to lead Britain out of the European Union if other EU states don’t cut immigration to the United Kingdom, as the Brits are very likely to vote for the motion in the referendum that Cameron promised, a Liberal Democrat member of the British Parliament told Sputnik Friday.

“It certainly feels a viable option because he [Cameron] is talking himself into having to do it,” Mike Hancock said commenting on the possibility of a so-called Brexit.

“What he [Cameron] does not understand is that if the vote [on leaving the EU] is taking place now or in the very near future, the possibility of people in the UK voting to leave is a very real one and that is a danger for all of us in the United Kingdom,” Hancock added.

The parliamentarian underlined that Mr. Cameron “is taking a very high risk,” as he may not even understand “how many of the British people are actually opposed to our continuing membership in the EU.”

Hancock warned that walking out of the European Union, would be devastating to the business community, for jobs in the United Kingdom, and would have a negative impact on lifestyles.

Immigration is at the forefront of UK concerns over the European Union. Net migration to the United Kingdom increased by 43 percent over the past year, instead of Cameron’s promises to bring the inflow of migrants down from hundreds of thousands to at least tens of thousands. But this is not the only issue contributing to the desire of a “Brexit”.

“People are fed up with the EU and taking more money from the UK to bail out countries that are not doing what they are ought to do to get their affairs in good order. That is why, it’s remarkably strange that we would actually as a government in the UK be encouraging other countries, like the Ukraine to join the EU, when in fact they have bankrupt economies,” Hancock told Sputnik.

“And once again, it will fall on the EU, on countries like the UK and Germany to have to bail out these countries and the British people just will not accept it,” the British lawmaker said.

Hancock stressed that Britain would still be better off staying within the European Union and it has to find a solution to the immigration issues that will be acceptable for both the United Kingdom and the European Union.

“On immigration we have to have strong rules, but the rules that we have to find [must be] acceptable to the EU. Because if they are not, we will once again find ourselves in a position where we are walking and talking away out of the EU. And that will be a very dangerous political situation,” Hancock said.

In January 2013, Cameron promised to hold a referendum on Britain's membership of the European Union in 2017, if the ruling Conservative Party wins an outright majority at the next general election scheduled for May 2015. Earlier in the day, in a televised speech on the BBC, the prime minister stressed that the United Kingdom should remain in the European Union, but London will push for reforms in the 28-member bloc.