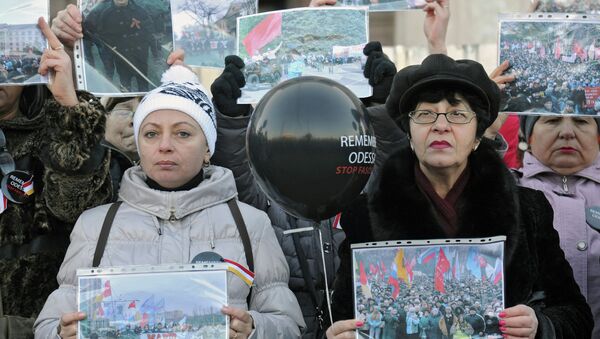 The United Nations Committee against Torture has expressed concern with Ukrainian excessive use of force in Kiev, Odessa and Mariupol.

Six Months After Odesa Massacre: Facts and Details
MOSCOW, November 28 (Sputnik) — The United Nations Committee against Torture has expressed concern over excessive use of force by Ukrainian government's police and other government forces in Kiev, Odessa and Mariupol in its latest report.

"The Committee is concerned at allegations of excessive use of force by government special and riot police and other personnel in connection with the popular protests throughout Ukraine and in particular in the dispersal of protesters in Kyiv on 30 November 2013, as well as events in December 2013, and reported killings of protesters on 19 to 21 January 2014 and 18 to 20 February 2014," a report published on Friday said.

The UN committee also highlighted other incidents in May which were cause for concern including the alleged crimes committed by Ukrainian law enforcement officers during unrest in Odessa and Mariupol in May.

"The Committee is also concerned at other crimes reportedly committed by law enforcement officers during the Maidan protests, including alleged beatings of medical staff seeking to attend the wounded. Events in Odessa (2 May 2014) and Mariupol (9 May 2014) have also evoked concern over the loss of life and allegations of excessive use of force," the report continued.

The committee has called on the Ukrainian government to complete a thorough, unbiased investigation into the above incidents.

17 Significant Moments of the Euromaidan
Ukraine underwent a regime change in February, following mass protests on central Kiev's Independence Square, known as Maidan. Many Ukrainian citizens, including those from southeastern regions of the country refused to recognize the new government that came to power after a coup in February. According to official information from Ukraine's Health Ministry, the clashes on Maidan resulted in the deaths of 104 people. However, the organization of Maidan volunteer doctors has estimated the death toll at around 780 people.

In May, clashes in the city of Odessa killed 48 people and injured over 200. Most of them died when Right Sector gunmen blocked anti-government protesters in the House of Trade Unions and set fire to the building.

Another tragedy leading to dozens of human casualties occurred on May 9 in the city of Mariupol when armed gunmen opened fire on civilians.