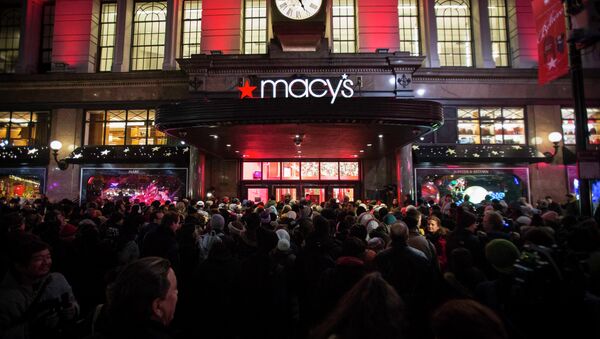 A crowd of people stormed through the New York Macy's store in New York on its Black Friday sale that officially opens the Christmas shopping season, USA Today reported Friday.

Over 15,000 people showed up Thursday evening when the store opened, earlier than the previous year, Macy's chief executive Terry Lundgren was quoted as saying by the newspaper.

"I think that's part of what New York City is all about but Macy's is certainly where people come when they come to New York City," he said.

African-Americans Have Less to Be Thankful for on Thanksgiving: Protester
Black Friday is the day following Thanksgiving in the United States, which is the fourth Thursday of November. Retailers often open their stores earlier and offer big sales to get the Christmas holiday shopping season going.

Black Friday is as much about the experience as the shopping. "I don't know what I'm here for, I'm just here," Ashley Ritchie, who had been standing outside the doors before the store opened, said, USA Today reported.

No longer exclusive to the United States, the BBC reported that police were called in to help control crowds of Black Friday shoppers at major shopping spots, like Tesco supermarkets. Online shoppers were not excluded – web stores like Amazon and Walmart's webshop are attracting customers with deep discounts and campaigns proclaiming "best buy" and "live sales online."

Online Activists Protest Black Friday Sales Spree Over Ferguson Ruling
Meanwhile, the network Blackout for Human Rights and other activists urged the public to boycott Black Friday to protest police violence against minorities, following unrest in Ferguson, Missouri, and major US cities. The protests were spawned by a grand jury decision not to indict Darren Wilson, a white police officer who shot dead Michael Brown, an unarmed 18-year-old African-American on August 9.
Newsfeed
0
Access to the chat has been blocked for violating the rules . You will be able to participate again through:∞. If you do not agree with the blocking, please use the feedback form
The discussion is closed. You can participate in the discussion within 24 hours after the publication of the article.
To participate in the discussion
log in or register
loader
Chats
Заголовок открываемого материала