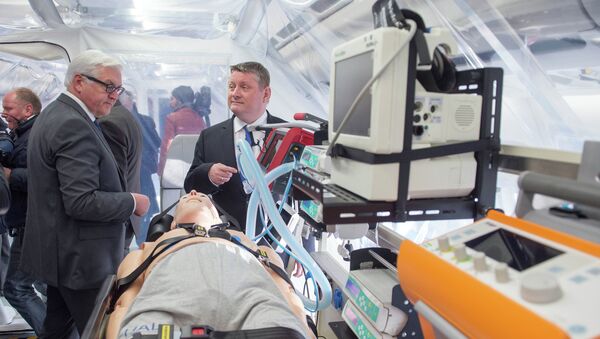 "If [Ebola patients] get infected we will do everything humanly possible to bring them quickly to the best possible medical care," German Health Minister Hermann Groehe was quoted as saying by the news agency.

Purportedly the first medevac aircraft of its kind, the Airbus A340-300 was refitted in cooperation with Lufthansa airlines and the German federal government's disease control and prevention institute, according to ABC News.

The refurbished 295-passenger jet will be able to transport one patient at a time in an isolation unit with two airlocks, an air filtration system and a protective suit decontamination cabin, the news agency added.

In the latest World Health Organization figures released Wednesday, the death toll from Ebola has reached more than 5,600 people worldwide out of almost 16,000 cases. The recent outbreak began in December 2013, spreading from Guinea to Liberia and Sierra Leone.