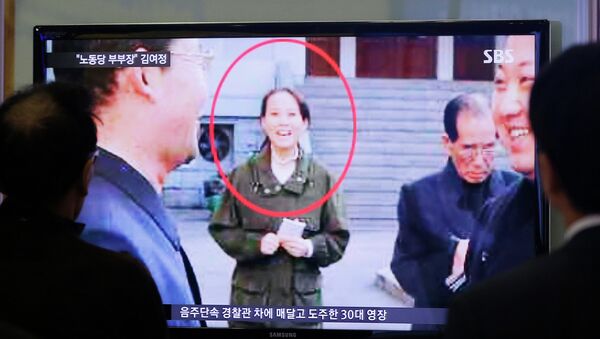 © AP Photo / Ahn Young-joon
Subscribe
Kim Yo Jong, the younger sister of Kim Jong Un, North Korea's ruler, has assumed one of the highest posts in the DPRK's ruling party. Experts say she may become as powerful as her aunt Kim Kyong Hui once was; her aunt occupied key party posts during the rule of her brother, Kim Jong Il.

"Kim Yo Jong, believed to be 26, made her first public appearance during the funeral of her father and longtime ruler Kim Jong Il in December 2011. Since then she has occasionally been seen accompanying her brother to political events and on his ‘field guidance trips,’ but without any specific title attached to her name," the Guardian noted.
Remarkably, on Thursday, November 27, KCNA reported of Kim Jong Un's visit to the Korean April 26 Cartoon Film Studio, adding that "accompanying him were Secretary Kim Ki Nam, First Vice Department Director Ri Jae Il and Vice Department Directors Kim Yo Jong and Kim Ui Sun of the WPK Central Committee."

Kim Jong Un and his sister Kim Yo Jong are the children of Kim Jong Il and his fourth partner Ko Yong Hui. They attended the same school under pseudonyms in Switzerland in the mid-1990s.

Experts stress that Kim Jong Un's sister is currently "on the rise within the regime," suggesting that she could be "a sort of events director and aide to her brother, managing his schedule and accompanying him on trips," Time magazine notes. The media source cites Michael Madden, the founder of the blog North Korea Leadership Watch, as saying: "She [Kim Yo Jong] may be one of the only people Kim Jong Un trusts completely." She apparently has access to sensitive and confident information and "may end up playing the same leadership supporting role as her powerful aunt, Kim Kyong Hui," the Guardian underscores.

It is worth mentioning that Kim Kyong Hui, a close aide to her brother Kim Jong Il, occupied high positions in North Korea's Communist party during his rule. However, she disappeared from public view soon after her husband Jang Sung Thaek, accused of committing treason against the state, was executed by Kim Jong Un in 2013.

Time magazine emphasizes that Kim Yo Jong's "presence at Jong Un's side is rich with symbolism," stressing that "her first official public appearance, in March 2014, came not long after the disappearance of her aunt, Kim Kyong Hui."

"The old power elites loyal to Kim Jong Il are being pushed out. They will be replaced by new, younger elites who can safeguard the leadership of Kim Jong Un," noted Yang Moo-jin, a professor at Seoul's University of North Korean Studies, as quoted by Time.