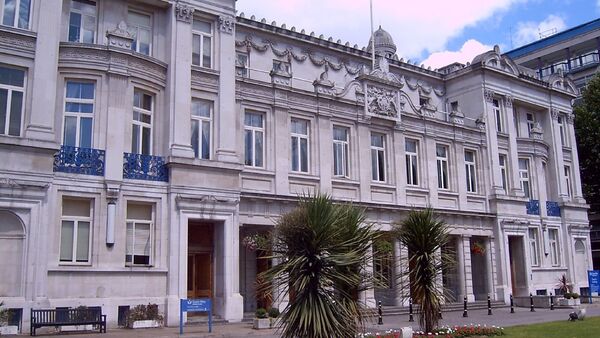 A new cancer-fighting drug undergoing trials at the Queen Mary University of London has been found effective in fighting advanced bladder cancer, a press release from the university's School of Medicine has said.

MOSCOW, November 27 (Sputnik) — Scientists from Queen Mary University of London have developed a breakthrough therapy for fighting advanced bladder cancer, the first major advancement in the treatment of the disease in over 30 years, according to a press release from the university’s School of Medicine.

A study published yesterday in the science journal Nature has explained that the treatment works in part by depriving cancerous tumors of a protein they use as ‘camouflage’ to prevent the immune system from effectively fighting them. The protein, known as PD-L1, is combated by the antibody drug known as MPDL3280A, which was developed by the pharmaceutical company Roche.

Dr. Tom Powles, the study’s lead author, explained that the research endeavor “is a hugely exciting step forward in the search for alternative advanced bladder cancer treatment.” He noted that “for decades, chemotherapy has been the only option, with a poor outcome and many patients too ill to cope with it.”

The new drug, which works in part by removing the “camouflage layer [protein], PD-L1,” makes “the tumor identifiable” by the immune system, the BBC quoted Dr. Powles as saying.

The study, which was carried out by 15 doctors and scientists from Queen Mary, applied the experimental drug to 68 people with advanced bladder cancer, all of whom had unsuccessfully undergone other forms of therapy, and had been designated terminally ill, with 6-8 months to live. The study determined that 30 of the 68 had PD-L1 protein positive tumors, and that within six weeks 43 percent of the 30 had found their tumors to have shrunk, that figure rising to 52 percent after a 12 week follow-up. Two of the patients were shown to have no signs of the disease following treatment. The study also found that about 10 percent of the patients whose tumors had shown no presence of PD-L1 also responded positively to the treatment.

The study showed no major adverse effects for the therapy; fatigue and loss of appetite were found to be its most commonly reported side effects.

The drug has now been given ‘breakthrough status’ by the US Food and Drug Administration, and is set to be green-lighted for fast-track testing, which may result in it being used in the United States as early as the end of 2015. In Europe and elsewhere, the drug will need to undergo additional trials, the BBC explained.

Dr. Powles noted in the university press release that he hopes the FDA’s fast tracking can speed up the drug’s approval, “so that we can begin to give hope to the thousands of people affected by advanced bladder cancer each year.”

Bladder cancer is the seventh most common form of cancer in the United Kingdom; 10 percent of patients are diagnosed as suffering from an advanced stage of the disease. Such cases are difficult to treat, given that they mean that the cancer has spread to other parts of the body. About 10,000 people are diagnosed with the disease each year, which causes about 5,000 deaths; those with the advanced form of the illness presently have an average life expectancy of 12-18 months, The Telegraph explained.

The experimental new drug and the study are part of an approach to cancer known as immunotherapy, which works with the body’s immune system to treat various forms of cancer. Professor Peter Johnson, chief clinician at Cancer Research UK, noted that “we’re seeing a lot of very exciting results from these new treatments using the immune system,” adding that “this study in bladder cancer is further proof of the power of this approach,” the BBC quoted him as saying.