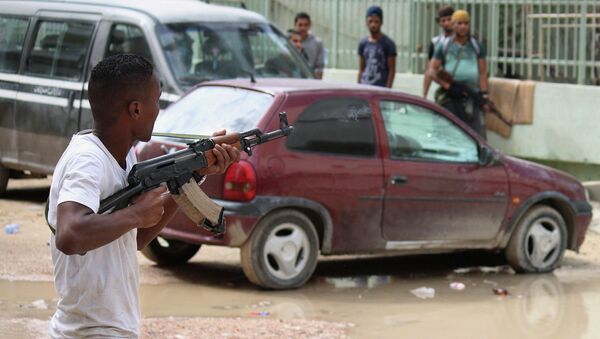 “Extremist militias controlling Derna in the absence of any state authorities have unleashed a reign of terror against its inhabitants,” HRW’s Middle East and North Africa director Sarah Leah Whitson was quoted as saying by the organization.

HRW said it had documented three apparent summary executions and at least 10 public floggings carried out by the Islamic Youth Shura Council extremist group, which has pledged allegiance to Islamic State militants in Syria and Iraq.

According to Derna residents interviewed by the organization, the city is “fully under the control of fundamentalists.”

The extremist group emerged in April and gradually took control over the city, creating its own public administration, the organization said.

The militants have also reportedly established their own judicial institutions and are implementing a radical version of sharia law. Some of the judges at the new Islamic Court in the city are foreign nationals, HRW reported, citing local residents.

UN Secretary General Calls for Dialogue in Libya Amid New Airstrikes
“The sessions at the Islamic Court where people are interrogated and sentenced by a panel of three judges are not public. Usually, the court announces if it will carry out a death sentence beforehand,” a resident was quoted as saying by HRW.

Another Derna local told the organization that he had witnessed three public floggings in the city on November 18. “Masked men from the Shura Council lined up eight young men at Al-Sahaba Square and punished each with 40 whips after they were caught drinking alcoholic beverages at a ‘bachelor party’ together with the groom,” he said.

“If an individual is caught drinking alcohol, they [Shura Council] will implement the ‘whipping punishment’ on the spot,” the witness added.

HRW lashed out at Libyan authorities, stating that they have “shown themselves powerless or unwilling” to investigate and prosecute extremists, while the UN Security Council “is still to deliver on this threat of sanctions.”

Libya is currently facing its worst wave of violence since the 2011 overthrow of long-time leader Muammar Gaddafi and the subsequent civil war that saw violent clashes involving numerous militias.