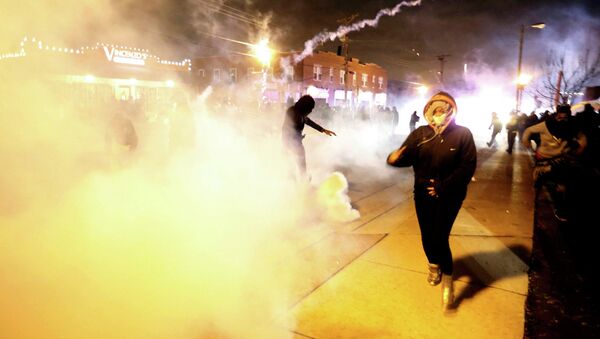 © REUTERS / Jim Young
Subscribe
US Police used pepper spray to disperse protesters in downtown St. Louis during the latest protests only because 'unlawful and crimes were committed'.

ST. LOUIS, November 27 (Sputnik) – US Police used pepper spray to disperse protesters in downtown St. Louis in the latest disturbance over the killing of African-American teenager Michael Brown by a white police officer, a law enforcement official has told Sputnik.

"One protester was additionally charged with 'Assault 3rd on a Law Enforcement Officer'. Pepper spray was used only after the gathering became unlawful and crimes were committed, such as the assault on a City Marshall outside of City Hall," Jackson added.

News Conf. "A group of rioters went to church street broke out windows at City Hall. It was the only place we used tear gas."

Some 300 protesters had marched to City Hall and held a mock trial of Darren Wilson, the Ferguson police officer, who shot and killed 18-year-old Brown in the St. Louis suburb on August 9.

Some demonstrators stormed into the St. Louis City Hall, prompting police to call for more than a hundred reinforcement officers to restore order at the municipal building.

On Monday, a grand jury decided not to bring charges against Wilson for shooting and killing Brown. The decision led to a fresh round of protests in Ferguson and major cities across the United States on Tuesday.