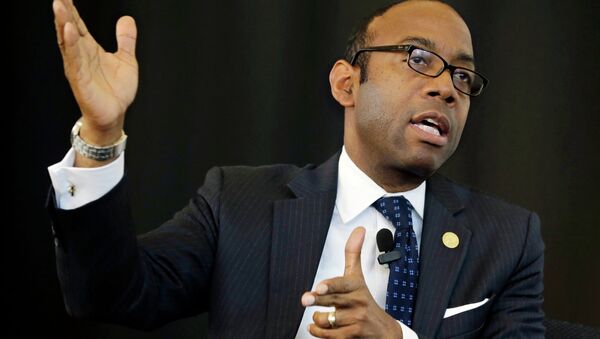 © AP Photo / Mel Evans
Subscribe
The president of the National Association for the Advancement of Colored People is going to participate in the 120-mile march across Missouri in memory of African-American teenager Michael Brown, killed by a white police officer.

FERGUSON, November 27 (Sputnik) – Cornell William Brooks, president of the National Association for the Advancement of Colored People (NAACP), said he would join a seven-day march across Missouri to protest the killing of unarmed African-American teenager Michael Brown by a white police officer.

“On Saturday, I'll join NAACP members in Ferguson, Missouri, to set out on the Journey for Justice. This seven-day, 120-mile march will lead us from Ferguson to the Governor’s Mansion in Jefferson City — in memory of Michael,” Brooks said in a statement Wednesday.

Brooks added that the NAACP would join protests against US police brutality and racial profiling.

The Journey for Justice march, announced on Monday, will bring together NAACP members, who will demand a change of leadership of the Ferguson police department, as well as reforms in police practice across the United States.

On Monday, a grand jury decided not to bring charges against white police officer Darren Wilson for shooting and killing 18-year-old African-American Michael Brown in Ferguson on August 9.

“With every passing day, the grand jury's decision appears more egregious. Our Journey for Justice — and the miles you will walk for Michael — will keep a bright light shining on this great injustice,” Brooks stressed.

The grand jury's decision sparked a wave of protests in major US cities on Tuesday. St. Louis Police declared the protests an unlawful assembly, arresting 44 Tuesday and 61 the previous night.

Missouri Governor Jay Nixon tripled the number of US National Guard troops sent to the area from 770 to 2,200 Tuesday.