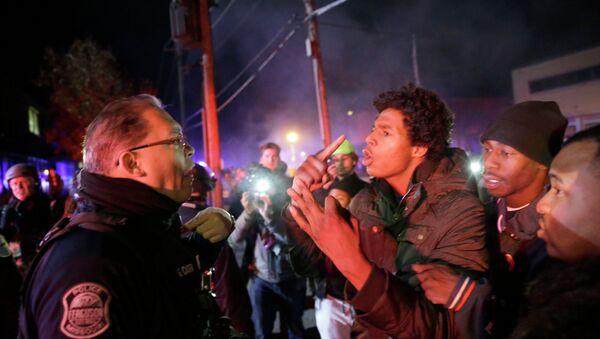 © AP Photo / David Goldman
Subscribe
Two correspondents from Rossiya Segodnya International Information Agency who were attacked by a group of young people in Ferguson, have initiated legal proceedings against the attackers.

FERGUSON, November 27 (Sputnik) – Police have received a statement from two correspondents of the Rossiya Segodnya International Information Agency, who have been attacked by a group of young people in Ferguson and whose car was burnt.

"On Wednesday, we had to go to different police checkpoints, because the state police and local police, as well as the National Guard and other [security forces] are now working in Ferguson. The police station was closed. In the end, mobile police units coordinated their efforts and took my testimony," RIA Novosti correspondent in Washington, Alexey Bogdanovskiy, said.

"I was treated correctly, asked for details and they let me write down everything I wanted to. The official printout of the application could not be obtained because the police are working "on wheels" in an emergency mode, so I now have only a written note from a police officer with the number of the application," Bogdanovskiy added.

According to the reporter, at the time of the attack the police officers approached by him and his colleague – a British freelancer, working for the Sputnik News Agency — told them "that they will not go to where the car was left", because the teenagers who attacked the correspondents, "are probably armed".

"Most likely, the officers did not want to escalate the situation," Bogdanovskiy said, adding that the fact that the incident took place around the spot where 18-year-old African-American Michael Brown was fatally shot in August might have influenced their decision.

In response, the teenagers attacked the reporters, demanding their car keys and phones. The attackers gave a slight bump on the head to one reporter and tried to steal the backpack of the other, but both managed to escape from the offenders.

The police officers, standing nearby, refused to help the journalists, saying that the teenagers were possibly armed.