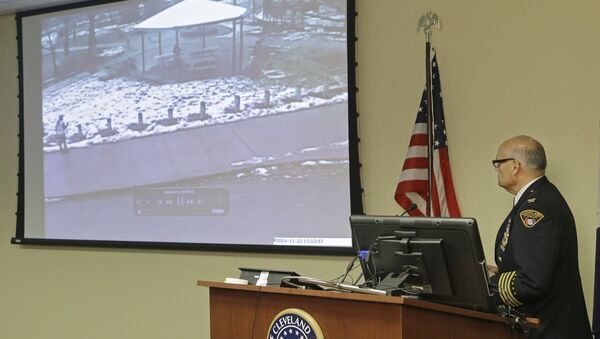 © East News / AP Photo/Mark Duncan
Subscribe
The Cleveland Police Department has released a video of a 12-year-old African-American boy shooting and the audio recording of a 911 call.

WASHINGTON, November 27 (Sputnik) – Video footage of a 12-year-old African-American boy, who was carrying a toy gun when he was shot and killed by two police officers, has been released by Cleveland police.

"This is an obvious tragic event where a young member of our community lost his life. We've got two officers that were out there protecting the public that just had to do something that nobody wants to do," Tomba added.

According to the deputy police chief, the decision to release the video of the shooting and the audio recording of a 911 call, which prompted police to arrive at the scene, came at the request of the victim's parents.

In the audio, a man was saying that a boy in a Cleveland park was brandishing a "probably fake" weapon and pointing it at people. Officers arrived at the scene within several minutes.

Law-Abiding Citizens Need Guns to Protect Themselves, as US Full of Weapons

The released video shows Tamir Rice, a 12-year-old African-American, wandering around and pulling out what appeared to be a gun, and several times pointing it at people. At one point a police car pulls up and within one or two seconds Rice was shot from a distance of less than ten feet.

Tomba identified the police officers as Timothy Loehmann, 26, and Frank Garmback, 46, who are now on administrative leave as the investigation into the fatal shooting continues. Loehmann, who is white, joined the police force in March 2014. He was the one who fired the fatal shots.

Tomba said Rice was given first-aid within four minutes of the shooting by a nearby FBI agent, while an emergency response team arrived at the scene three minutes later.

Rice allegedly pulled out his toy gun and was then shot at twice by Loehmann from the passenger side of the police car, following three warnings to put down the weapon, according to the officers' statements and initial police reports.