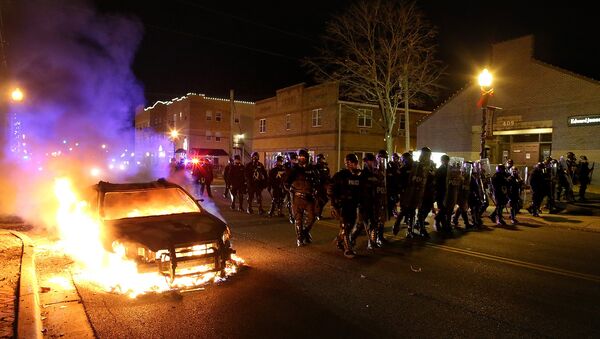 RT-Owned News Agency Says Producer Released From Detention in Ferguson
FERGUSON, November 26 (Sputnik) – Two correspondents from Rossiya Segodnya International Information Agency were attacked Tuesday by a group of young people in Ferguson, the police refused to help the reporters; the journalists were not injured, however, their car was burnt.

The two reporters are a Russian national working with RIA Novosti and a British freelancer of the Sputnik News Agency. The incident occurred near the place where a police officer shot and killed the African American in August. The journalists left the car to ask a group of teenagers who have gathered in the street what they thought of a grand jury's decision not to bring charges against white police officer for shooting and killing an unarmed 18-year-old African American.

In response, the teenagers attacked them demanding to give away car keys and phones. The attackers gave a slight bump on the head of one reporter and tried to steal the backpack of the other, but both managed to escape from the offenders.

Rand Paul Blames Politicians for Ferguson Tragedy
The police officers standing nearby refused to help the journalists, saying that the teenagers were possibly armed.

On Monday, a grand jury decided not to bring charges against white police officer Darren Wilson for shooting and killing an African American teenager Michael Brown, an unarmed 18-year-old, during an altercation in a leafy backstreet in the mostly-black suburb of Ferguson on August 9.