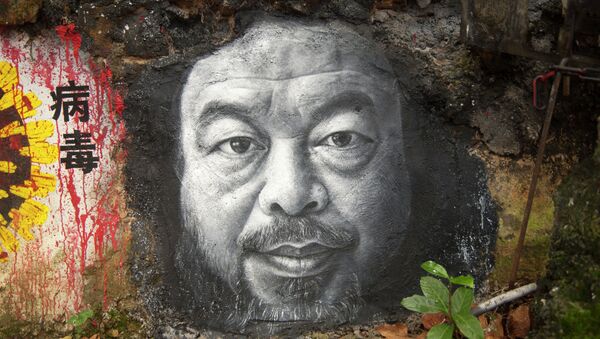 © Flickr / thierry ehrmann
Subscribe
China currently mends its fences in the global art market, due the favorable economic conditions and unique ability of local artists to capture the cultural, public and political trends of the moment.

MOSCOW, November 26 (Sputnik) — China is currently strengthening its positions in the international art market due to favorable economic conditions and has all it takes to become the world leader in art sales, a senior research fellow at the China Academy of Art, told Sputnik radio Wednesday.

"The fact that Chinese art market is scoring high in the global contemporary art sales rankings is a huge progress for us. This great leap was made in the last five or six years. And there are reasons for it. Amid the rapid growth of the Chinese economy and the rapid increase in people's lives quality, the income and purchasing power of the population increased as well, and so did the art investments. And especially the investments in national art," Sun Jie told Sputnik.

"China is developing rapidly. I believe we have good prospects of expanding our art market and increasing the [art] sales," the expert added.

Russian artist Vasili Tsereteli also believes that the favorable economic conditions are among the main reasons behind the Chinese art boom, but what matters even more is the unique ability of local artists to capture the cultural, public and political trends of the moment.

"The works of the present-day Chinese artists are constantly growing in price, as they [the artists] are able to reflect precisely the cultural and societal phenomena of the modern world. And when some political context can be found in such works… the price for such a work of art immediately soars," Tsereteli told Sputnik, adding that China is currently investing in its art, with new art galleries and more art collectors appearing in the country.

Tsereteli, who is also the executive director of Moscow Museum of Modern Art, noted that the Chinese avant-garde art was "discovered" by the French collectors Dominique and Sylvain Levy in 2005 and as of today there are more Chinese art lovers in France than in any other European country. However, there is a number of collectors of Chinese art in Russia, where some well-known artists from China have studied.

According to the global leader of art market information, Artprice, in the season starting in July 2013 and ending in July 2014 China's art revenues exceeded 601 million euro ($750 million), or 40 percent of the global market, while the United States gained some $690 million and the United Kingdom – about $290 million. However, the United States still leads in the number of art works sold above 1 million euro ($1.25 million).