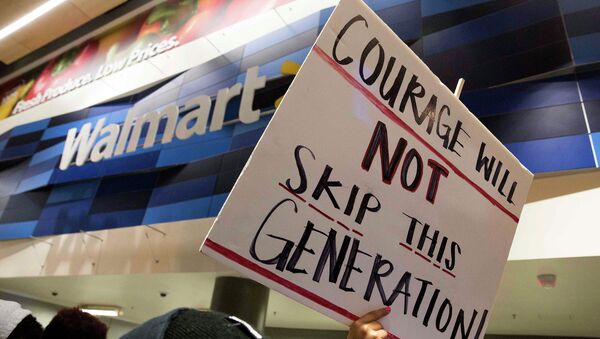 © REUTERS / Joshua Roberts
Subscribe
Workers at more than 1,600 Walmart stores all across the US started protesting against the company's employee policy, which they consider exploitative.

MOSCOW, November 26 (Sputnik), Daria Chernyshova — Over 1,600 Walmart stores go on strike across the United States as the employees protest against the company’s unfair and illegal retaliation measures against workers, who stand up to speak about poor work conditions, low wages and inadequate social policies, which make them depend on food stamps.

“We are here protesting against retaliation measures,” a female employee, who has been working for Walmart for 15 years, told Sputnik on Wednesday, while being actually at the protest at of the stores.

“We are being shouted at, sacked for no reason, and there are 40 to 50 people in our store, who could be sacked unless they start working now, all because of our strike” she said, stressing that some more general decency would not be a bad idea.

The employees are threatened to be given a notice unless they stop the strike, which was, in fact, officially authorized.

“I’m still employed, but my colleagues have faced threats of being fired, and there were people, who were fired because of protesting previous years,” the employee told Sputnik.

Among the numerous rights violations, the employee also cited pregnancy policy, when pregnant female workers have to climb the ladders and carry heavy boxes, thus forcing them to take early leaves of absence and cutting their payment.

“We want some more decency, we want to work, but over the years it has been getting only worse,” one of the protesters told Sputnik.

This is the third time Walmart employees go on strike, and this year the scale and scope of the protest are truly immense, commencing days before America’s biggest shopping day – Black Friday.

This week’s strike is different because there are many more people protesting outside Walmart stores, so that the stores in fact remain operational. The organizers and the protesters say it should make the company listen to their demands and realize they are not speechless, while actually making some changes. This year, the demands have become more precise – social policies and a wage of $15 an hour, consistent full-time hours.

OUR Walmart, who is in charge of organizing the strike, says they seek “to ensure that every Associate, regardless of his or her title, age, race, or sex, is respected at Walmart.”

According to a report by Americans for Tax Fairness (ATF) How Walmart is Dodging Billions in Taxes: And Scheming to Avoid Billions More, Walmart uses tax breaks to dodge over $1 billion annually in federal taxes.

"Although the US corporate income tax rate is 35 percent, Walmart was able to take advantage of tax loopholes to reduce its effective tax rate to an average of 29.1 percent from 2008 to 2012, according to Citizens for Tax Justice (CTJ),” the report says, concluding that this allowed the company to retain tax savings of $5.1 billion over five years, or $1 billion a year on average.

Moreover, the report states that “Walmart is working behind the scenes to help lower the US corporate tax rate to 25%, which would allow Walmart to cut its tax bill on average another $720 million a year.”

The company also has $21.4 billion in profits offshore, which allows to avoid federal taxes.

With all that in mind, Walmart’s wages are some of the smallest across the country, with many workers forced to rely on food stamps.