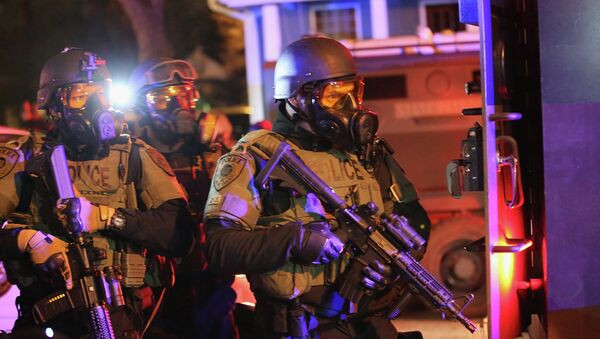 Ferguson: Safety of Citizens is Lost With Unaccountability of Police
MOSCOW, November 26 (Sputnik) – The United States pursues a policy of double standards in dispersing demonstrations in the city of Ferguson, Missouri, a senior Russian parliamentarian told RIA Novosti Wednesday.

“When it comes to ‘orange revolutions’ organized by the West, casualties among the civilian population is a side effect on the road to democracy, but when the US National Guard quells civic protests, they are imposing much-needed order in an emergency situation,” chairman of the Federation Council (Russia’s upper house of parliament) Committee on Constitutional Legislation Andrei Klishas said.

The lawmaker noted that their efforts are “turning back from principles they dictate to the world,” adding that US authorities are "using any means necessary" to quell the unrest in Ferguson.

Police Arrest 44 in Ferguson on ‘Much Better Night’: St. Louis Police Chief
The St. Louis grand jury's decision on Monday not to indict white police officer Darren Wilson over the fatal shooting of African-American teenager Michael Brown sparked a wave of protests in major US cities on Tuesday. St. Louis Police declared the protests an unlawful assembly, arresting 44 Tuesday and 61 the previous night. Missouri Governor Jay Nixon has tripled the number of National Guard troops from 770 to 2,200 Tuesday.

This is now considered an unlawful assembly. Those refusing to leave the area will be subject to arrest. #Ferguson

"At the same time, civilians in Syria are dying from US air strikes. Violence is the norm in achieving [a] 'good cause' both within the country and with respect to citizens of other sovereign states," Klishas went on to say.

Earlier in the day, the UN reported the US-led coalition against the Islamic State (IS, also known as ISIS/ISIL) in Syria has killed at least 50 civilians since the start of the airstrikes in late September.