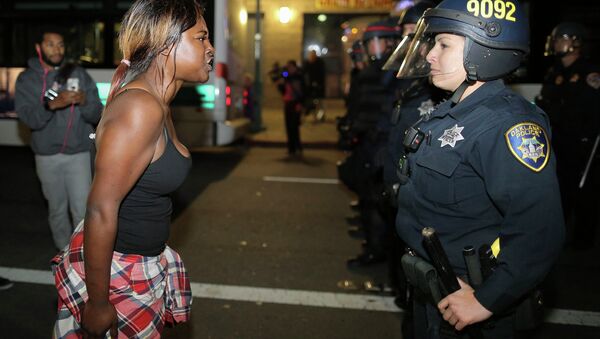 According to Captain of the Missouri State Highway Patrol, some of the protesters have been even helping the law enforcers in Ferguson on Tuesday.

"Generally it was a much better night," Belmar told reporters in the early hours of Wednesday, adding that about 44 people were arrested in Ferguson on Tuesday, down from 61 the previous night.

According to Captain Ron Johnson of the Missouri State Highway Patrol, "some of the peaceful protesters were actually helping” the law enforcement on Tuesday.

Addressing the previous night’s unrest, Johnson stated that nobody in the police force had envisioned how bad Monday’s protests would be. “None of us could imagine that last night would be what it was,” he said.

Police Says Ferguson Protests ‘Unlawful Assembly’, Pledges Arrests
“We would probably have done something different, but we could never have imagined that,” Johnson added, noting that “we’ve seen destruction, riots before” but nothing like this has happened in the country’s recent history.

Despite the fact that Tuesday's protests were generally calmer, police said they had confiscated two weapons and that numerous bottles, rocks, pieces of concrete, and a Molotov cocktail had been thrown at police officers.

Protests erupted in the St. Louis suburb of Ferguson on Monday after a grand jury chose not to press charges against the white police officer Darren Wilson, who fatally shot an unarmed African-American teenager Michael Brown in August.