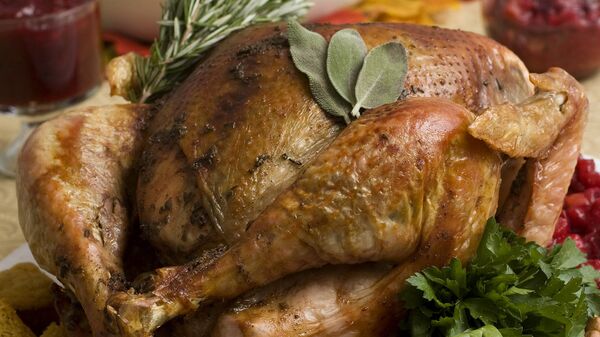 Paul Craig Roberts
All materialsWrite to the author
When Americans celebrate Thanksgiving, they don’t know what they are celebrating.

ATLANTA, November 25 (Sputnik) — In American folklore, Thanksgiving is a holiday that originated in 1621 with the Pilgrims celebrating a good harvest. Some historians say that this event is poorly documented, and others believe that the Thanksgiving tradition travelled to the New World with the Pilgrims and Puritans who brought with them the English Days of Thanksgiving. Other historians think the Pilgrims associated their relief from hunger with their observance of the relief of the siege of Leiden.

Apparently, the different English colonies and later American states each had their own day of Thanksgiving, if they had one. Abraham Lincoln tried to make Thanksgiving a national holiday in 1863, but the country was divided by the War of Northern Aggression.

Thanksgiving became a national holiday with the completion of the Reconstruction of the South after the War of Northern Aggression and the extermination of the Plains Indians by the Union generals in the 1870s. This taints Thanksgiving as a celebration of the preservation and expansion of the American Empire and accurately reflects the goal of the political forces behind Lincoln.

Today, Thanksgiving is simply known as “Turkey Day” and a time of retail sales. But as you eat your Thanksgiving meal, contemplate that what you are really celebrating is an Empire rooted in war crimes. If Lincoln had lost, and if there had been at that time a Nuremberg War Crimes Tribunal, Lincoln, Grant, Sherman, and Sheridan would have been hung as war criminals.

Sheridan was probably the worst of the lot. His war crimes against the South, especially those he committed in the Shenandoah Valley of Virginia, must have been forgotten by Southerns who vote Republican, the Party of Lincoln and Sheridan.  But Sheridan’s crimes against the Indians were worse. He attacked the Indians in their winter quarters, destroying their food supplies, and sent professional hunters to exterminate the Buffalo, declaring: “Let them kill until the buffalo is exterminated,” thus depriving the Plains Indians of their main food source.

Considering the enormity of the Republican Party’s crimes against the South, it is a testament to the forgetfulness of people that Southerners vote Republican. Sheridan expressed well the Republican attitude toward the South, declaring on several occasions that “if I owned Texas and Hell, I would rent Texas and live in Hell.”

In the 1870s, when Democrats won elections in Louisiana, Sheridan, who had power over the state, declared the Democrats to be bandits who would be subjected to his military tribunals.

Sheridan graduated near the bottom of his West Point Class, but his immorality and viciousness propelled him to the rank of Commanding General of the US Army. Today he would delight in the endless US bombings of women and children in seven countries.

Note: The War of Northern Aggression is the South’s description for what those dedicated to preserving the Union called the Civil War. The South’s term seems more correct. The Union forces invaded the South. A Civil War occurs when contending parties engage in violence for control of the government. But the Southern states were not contending for control of the US government; they exercised their right of self-determination and withdrew from the union into which they had voluntarily entered. It was an act of secession based in divergent economic interests between an export agricultural economy in the South and a rising industrial economy in the North in need of protective tariffs. The Southern secession was not an act of war for control over the government in Washington.

Unionists saw secession as a threat to empire. Another country could be a contender for the lands to the West. In his books, The Real Lincoln and Lincoln Unmasked, Thomas DiLorenzo makes a case that the War of Northern Aggression was waged in behalf of empire. He quotes Lincoln to the effect that he would preserve slavery if it would preserve the Union, and, if memory serves, DiLorenzo quotes Lincoln’s generals advising him not to throw a bone to abolitionists by saying it was a war to end slavery or much of the Union army would desert.

Today Americans think of themselves as citizens of the United States. But in 1860 people thought of themselves as citizens of states. When Robert E. Lee was offered a top command in the Union army, he declined on the grounds that he could not draw his sword on his native state of Virginia. Lincoln used the war to establish the supremacy of the central government in Washington over the states to which the Constitution had given most functions of government.

The supremacy of the central government that Lincoln established advanced the forces of empire.

The “war to end slavery,” like the Iraq war to protect America from “Saddam Hussein’s weapons of mass destruction,” looks more like fictional cover for the employment of violence in pursuit of empire than a moral crusade.