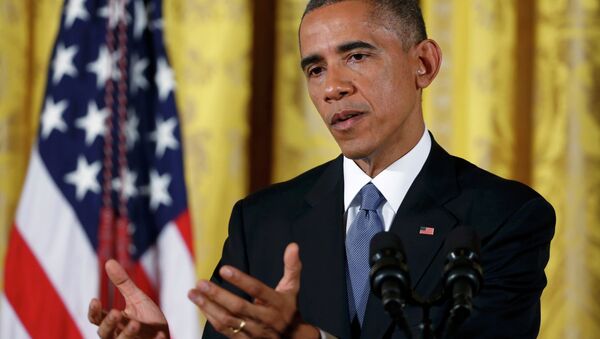 US is suffering from distrust between law enforcement and communities of color, President Obama stated. He called on Ferguson demonstrators to protest peacefully.

MOSCOW, November 25 (Sputnik) – The United States has to recognize that the country still faces broader challenges in race relations, US President Barack Obama said in a statement following a grand jury's decision to clear the white police officer who fatally shot a black teenager in Ferguson, Missouri.

"We need to recognize that the situation in Ferguson speaks to broader challenges that we still face as a nation. The fact is, in too many parts of this country, a deep distrust exists between law enforcement and communities of color," Obama told reporters Monday.

Protests Over Jury Ruling in Michael Brown Case Turn Violent in Ferguson
The St. Louis grand jury's decision sparked protests in 90 cities across the United States, with lootings and police car burnings reported, prompting the president to appeal for peace.

Flights Restricted Over Ferguson: US Federal Aviation Administration
"I join Michael's parents in asking anyone who protests this decision to do so peacefully," the president said, acknowledging that the grand jury's decision provoked "intense disagreement."

Grand Jury Finds Ferguson Policeman Not Guilty After Fatal Teenage Shooting
Off-duty St. Louis police officer Darren Wilson fatally shot unarmed 18-year-old Michael Brown in Ferguson, Missouri on August 9. Last week, Governor Jay Nixon declared a state of emergency and activated the National Guard in anticipation of the latest wave of unrest. On Monday, the St. Louis grand jury found Wilson not guilty in the death of Brown.
Newsfeed
0
Access to the chat has been blocked for violating the rules . You will be able to participate again through:∞. If you do not agree with the blocking, please use the feedback form
The discussion is closed. You can participate in the discussion within 24 hours after the publication of the article.
To participate in the discussion
log in or register
loader
Chats
Заголовок открываемого материала