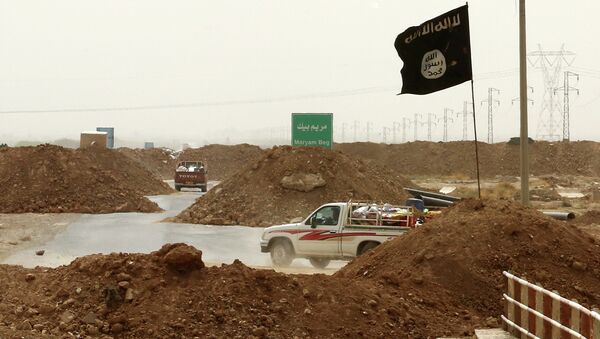 © AP Photo / Hadi Mizban
Subscribe
International
India
Africa
Countries of the US-led coalition against the IS, have different views on the military action against the islamists.

CHICAGO, November 25 (Sputnik), Elizabeth Wojt – Countries, allied with the United States against Islamic State (IS), including the United Kingdom, Germany, and France, are divided on the effectiveness of its anti-IS strategy, Vanderbilt University professor Thomas Schwartz has told Sputnik News Agency.

"Many people within European countries, similar to the United States, are not certain that this strategy will work, and a division of opinion is natural in this context," Schwartz said.

Over 50 countries, including more than a dozen Western nations, are taking part in the coalition, headed by the United States to defeat IS militants in Iraq and Syria. Some 30 nations agreed in mid-September to provide Iraq with all necessary backing, including military means.

Results of an ICM Research poll released Monday, showed that 65 percent of Britons in favor of airstrikes against the IS, while 61 percent of Germans were against the military move. Meanwhile, France was the most uncertain of the three countries with 19 percent of those polled unsure how to answer the question.

"Since 1945, the Germans have an almost instinctive pacifistic reaction to any military action," Schwarz explained to Sputnik.

"By contrast, the British understand the necessity to use force to defend their values,

and although they have sometimes disagreed with the United States about particular cases, in this situation the ruthlessness of ISIS [IS] has brought the two countries together," the Vanderbilt professor added.

"France is not as reluctant to use military force, but it may be skeptical that the Americans have an effective strategy," he added.

According to Schwartz, the Obama Administration's plans have caused countries to worry for financial reasons as well as fear. The professor noted that said coalition countries were afraid due to "the sheer ruthlessness and barbarity with which this group [Islamic State] has behaved."

"The possibility of ISIS retaliation is real," he said, adding that the video of beheadings, in particular, made a global impact and said that such public terror is what motivated the United States to organize a coalition against the extremist group.

In August, the United States began airstrikes against IS positions in Iraq. In September, US President Barack Obama formed an international anti-IS coalition in a bid to impede the military advancement of the jihadist group. The US-led coalition, supported by 60 nations, is currently carrying out airstrikes against IS militants in both Syria and Iraq.