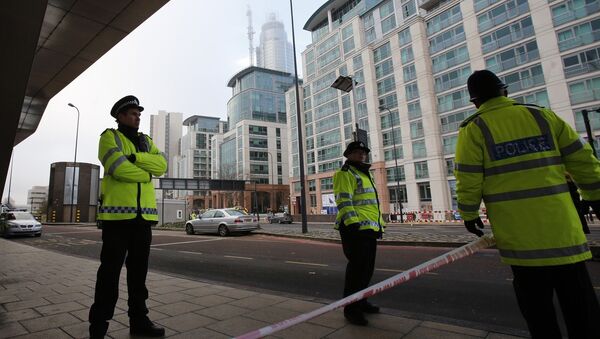 © East News / Tal Cohen
Subscribe
Under the countrywide Counter Terrorism Awareness Week starting on Monday, British police officers will talk to over 6,000 people in a variety of public places including airports, farms, shopping malls and universities.

MOSCOW, November 24 (Sputnik) – The British police have launched a countrywide campaign aiming at the prevention of home-grown terrorism and the spread of the terrorist sentiments in social media, the Metropolitan Police said on Monday.

Terror Threat in UK Greater Than Ever Before: Home Secretary
"The danger posed by violent extremists has evolved. They are no longer a problem solely stemming from countries like Iraq and Afghanistan, far away in the minds of the public. Now, they are home grown, in our communities; radicalized by images and messages they read on social media and prepared to kill for their cause," National Policing Lead for Counter-Terrorism, Assistant Commissioner Mark Rowley said in a news release.

Under the countrywide Counter Terrorism Awareness Week starting on Monday, police officers will talk to over 6,000 people in a variety of public places including airports, farms, shopping malls and universities. The officers plan to inform the public about the ways they can contribute to domestic security.

"Experience shows us that terrorists target busy, well-populated places to ensure that attacks have a maximum impact. Businesses, particularly those in crowded places, have an invaluable role to play in our fight against terrorists, violent extremists and other criminals. Their staff is often the first people to spot signs that something is wrong," Rowley added.

Access to Suspects Data Matter of National Security: UK Home Secretary
According to the Metropolitan Police, since the escalation of the terrorist threat in August, the number of direct public reports about the suspicious behavior has doubled.

A new counter-terrorism bill will be adopted in the United Kingdom this week. The provisions of the new legislation include counter-radicalization measures, tighter aviation and border security, the forced transfer of suspects to different parts of the country, a ban on insurance companies making ransom payments by the insurance companies.

The intensification of counter-terrorism measures in the United Kingdom is motivated by the risk of British extremists returning to the country, particularly those who have been fighting in Syria and Iraq. Over 500 Britons are thought to be in a number of countries both fighting and receiving terrorist training, according to the Security Service of the United Kingdom.