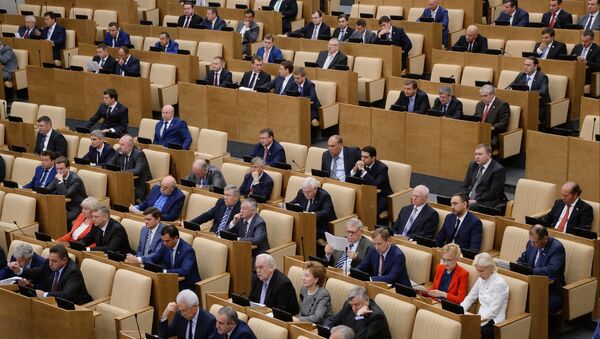 © Sputnik / Vladimir Fedorenko
/
Go to the photo bank
Subscribe
Kiev and Donbas representatives must make steps to establish a dialogue within the framework of the Minsk agreements, speaker of the State Duma said.

ASTANA, November 24 (Sputnik) — Ukraine’s central authorities and Donbas representatives must make steps to establish a dialogue within the framework of the Minsk agreements, Sergei Naryshkin, speaker of the State Duma, the lower house of Russia's parliament, said Monday.

“I very much hope that the elections in Ukraine will not be followed by worthless sanctions, but real steps to promote sustained dialogue between the central Ukrainian authorities and Donbas representatives, that their contacts will be in line with the agreements reached in Minsk, agreements proposed by the president of Russia,” Naryshkin said.

The parliament speaker noted that a year has passed since the Euromaidan protests began in Kiev. “Do you remember how it started? A year ago, people in Kiev went to Maidan, demanding to remove oligarchs and dishonest officials from their posts, improve living standards, modernize the economy and establish free movement to Western Europe,” he said.

Instead, Ukraine's economy is now "in a state of collapse, there is complete oligarchic rule, the European Union is discussing measures to tighten the regime of movement of Ukrainian citizens in the EU member states. This is the result,” Naryshkin stated.

“Now a high-ranking US official came to the country and essentially approved the creation of a coalition and the new government,” the Duma speaker said, adding that he feels with “the brotherly Ukrainian people”.

A political crisis erupted in Ukraine in November 2013, when the country's authorities announced a halt to the country's European integration process. The so-called Euromaidan protests began in Kiev's central square (Maidan Nezalezhnosti) and soon spread across the country.

Following a February coup in Kiev, residents of the eastern Donetsk and Luhansk regions established people's republics that later declared their independence. The crisis escalated further when Kiev authorities launched a military operation against the independence supporters in mid-April.

The conflicting sides reached a ceasefire agreement at a September 5 meeting in Minsk of the trilateral Contact Group on Ukraine, which comprises representatives from Ukraine, the Organization for Security and Co-operation in Ukraine (OSCE) and Russia. A memorandum specifying the implementation of the ceasefire was adopted at another Contact Group meeting on September 19. However, both sides have subsequently accused each other of violating the truce.