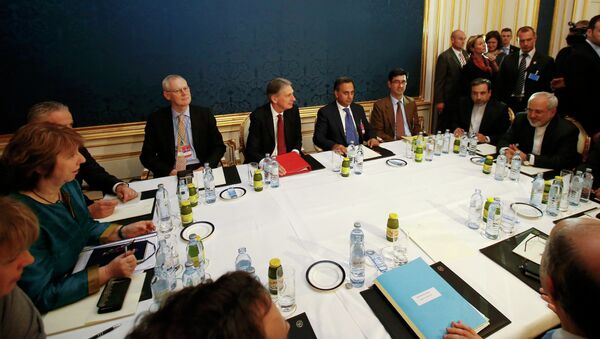 Less than 48 hours before the deadline on reaching an agreement on Iran's nuclear program, the P5+1 group and Tehran are discussing a range of options, including an extension of talks.

VIENNA, November 23 (Sputnik) — Extension of the talks on the Iranian nuclear program is one of the options on the table, a Western diplomat told journalists Sunday in Vienna.

"Only natural that less than 48 hours from the deadline we're discussing a range of options. An extension is one of those options," the diplomat said.

Earlier today, French Foreign Minister Laurent Fabius stated that the P5+1 group of international mediators was doing its best to reach an agreement on Iran's nuclear program, though he noted that differences remain.

Tehran claims its nuclear development is purely for peaceful purposes, such as meeting the country's growing energy needs. However, the West suspects Iran of developing a nuclear weapon under the guise of a peaceful program.

In 2013, the P5+1 group, comprising Russia, the United States, the United Kingdom, France, China and Germany, agreed to reach a long-term deal with Tehran, which would guarantee the peaceful nature of the Iranian nuclear program by July 2014. The deadline for the agreement was later postponed to November 24.

The final round of Iran's talks with the P5+1 group kicked off on November 18 in Vienna.