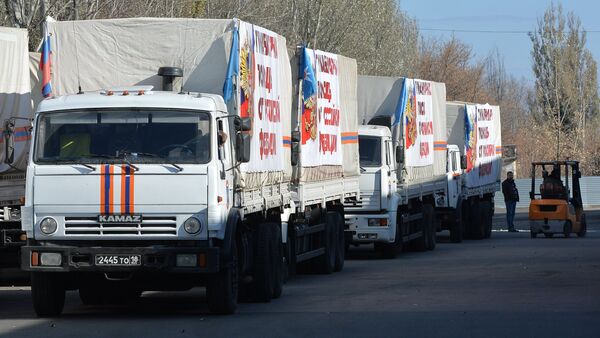 "Another humanitarian convoy will deliver to eastern Ukraine construction materials, which are necessary to restore the destroyed infrastructure and energy supply systems, as well as essentials and foods," Vladimir Stepanov told reporters.

The deputy minister also underlined that the convoy would head for Ukraine's eastern regions "as soon as it is ready."

This would become the eighth Russian humanitarian convoy to enter eastern Ukraine since August. The convoy is expected to be split up into two parts, with about 55 trucks to deliver humanitarian cargo to Ukraine's Donetsk region, while the rest of the trucks will head for the Luhansk region.

Last week, the previous Russian convoy delivered over 450 metric tons of humanitarian aid to the Donetsk and Luhansk regions.

In total, since August, Russian convoys have delivered more than 8,000 tons of food, water, power generators and medicine, as well as warm clothes and winter supplies for the residents of the war-torn Ukrainian regions.

In April, Kiev forces began military operations against supporters of independence in eastern Ukraine, claiming the lives of over 4,000 people. The ceasefire agreed by the Minsk agreement on September 5 has been repeatedly violated. Ukraine's southeastern regions are mired in a severe humanitarian catastrophe with many civillians struggling without clean water, electricity and other essential provisions.