Top Ten Important Events in Ukraine Over Past Ten Years 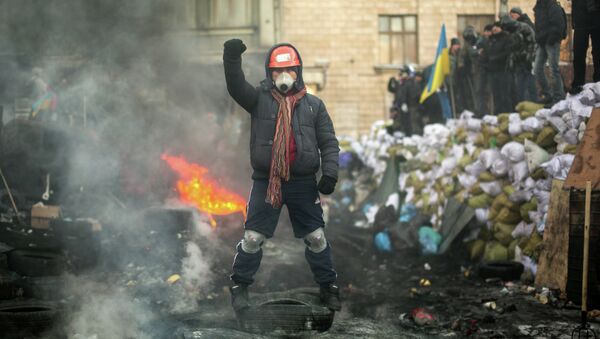 © Sputnik / Andrey Stenin
/
Go to the photo bank
Subscribe
Ten event that have brouht Ukraine to its current situation.

MOSCOW, November 22 (Sputnik) — Over the past decade Ukraine has lived through a series of crises and attempts to reform the country. All those events have brought Ukraine to its current situation.

On November 21, 2004, the second round of a presidential election took place in Ukraine, in which Viktor Yanukovych garnered 49.42 percent of the votes, and Viktor Yushchenko 46.69 percent.

Yushchenko's supporters said it was rigged. Opposition leaders declared the start of a "non-violent battle" for the recognition of Yushchenko's victory and organized a campaign of protests, rallies, pickets, strikes and other acts of civil disobedience.

On December 3, 2004, the Supreme Court invalidated the results of the second round and set a repeat round for December 26.

On January 10, 2005, Ukraine's Central Electoral Commission declared Yushchenko the winner. He secured 51.99 percent of the votes, while Yanukovych had 44.2 percent.

On January 23, Yushchenko was inaugurated as Ukraine's new president.

After the Orange Revolution, Ukrainian President Leonid Kuchma agreed to a repeat vote (the so-called third round) in exchange for the transfer of certain presidential powers to the Verkhovna Rada.

On December 8, 2004, Kuchma signed into law amendments to the Constitution, instituting a parliamentary-presidential form of government in the country. Constitutional reform repeatedly became cause for a political standoff between the president, on the one side, and the Cabinet of Ministers and parliament, on the other. Yushchenko, who led Ukraine until the start of 2010, wanted to carry out a different political reform, regaining some of the presidential powers, but failed to do that. In 2010, the country's new president, Viktor Yanukovych, also declared his intention to abolish the 2004 constitutional amendments and strengthen the presidency.

In October 2010, the Ukrainian Constitutional Court ruled the 2004 constitutional reform illegal. The 1996 Constitution was reinstated, and Ukraine once again became a presidential-parliamentary republic.

In late 2013-early 2014, a wave of protests swept Ukraine as a reaction to the government's abandonment of its path to European integration. One of the opposition's demands was the reestablishment of the 2004 Constitution. After four months of street clashes, on February 21, Yanukovych and the opposition signed a political settlement agreement. One of the document's key points was the restoration of the 2004 Constitution. On the same day, the Verkhovna Rada passed corresponding legislation.

On February 21, it was signed into law by then Ukraine's acting president, Oleksandr Turchynov.

On January 17, 2010, the first round of a presidential election was held in Ukraine, with 18 candidates, including incumbent President Viktor Yushchenko, Prime Minister Yulia Tymoshenko, Party of Regions leader Viktor Yanukovych, parliamentary speaker Volodymyr Lytvyn, and former speaker Arseniy Yatsenyuk. In the first round, Yanukovych garnered 35.32 percent of votes and Tymoshenko 25.05 percent. Yushchenko received 5.45 percent, 10 times less than in 2005.

In the second round, on February 7, Yanukovych won 48.95 percent and his challenger Tymoshenko 45.47 percent.

At various times, Tymoshenko was investigated as part of several criminal cases initiated by the Ukrainian and Russian investigative bodies. On October 11, 2011, Tymoshenko was found guilty of abuse of office in signing gas agreements with Russia, was sentenced to seven years in prison, and banned from holding top government positions for three years.

In late 2011, the former prime minister was sent to a penal colony in Kharkiv. Tymoshenko was transferred to a local hospital with back problems in May 2012.

Ukraine's former prime minister then faced a second set of charges, this time for financial malpractice in the second half of the 1990s, when she was head of the United Energy Systems of Ukraine. Tymoshenko never attended trial, citing poor health.

On February 22, 2014, Ukraine's Verkhovna Rada decriminalized the articles of the Criminal Code under which Tymoshenko was convicted. On that same day, she was released. On April 14, Ukraine's Supreme Court closed the "gas case" against Tymoshenko because it had found no evidence of wrongdoing.

On February 28, 2014, the Kiev District Court of Kharkiv dropped the charges against Tymoshenko with regard to the United Energy Systems of Ukraine, saying that there was no case to answer.

In late November 2013, a political crisis erupted in Ukraine when the Cabinet of Minister announced that the country's European integration had been put on hold. Mass protests, dubbed Euromaidan, swept Ukraine, and in January and February, radical elements clashed with police. On February 21, the government and the opposition signed an EU-brokered peace agreement. It envisioned the reinstatement of Ukraine's 2004 Constitution as amended, the formation of a national unity government, and the holding of a presidential election immediately after the country's new constitution was adopted.

GOVERNMENT AND OPPOSITION PLEDGE TO REFRAIN FROM USE OF FORCE

On February 22, there was a change of government in Ukraine, which bore features of a coup. In circumvention of the agreements, the Verkhovna Rada amended the Constitution and set a presidential election for May 25. On February 23, the Rada appointed speaker Oleksandr Turchynov as Ukraine's acting president.

On February 27, the Ukrainian parliament confirmed the "government of national trust," and Arseniy Yatsenyuk became the prime minister.

CRIMEA'S INDEPENDENCE AND REUNIFICATION WITH RUSSIA

Crimea did not recognize the legitimacy of Ukraine's new government. On March 11, 2014, the Crimean Supreme Council adopted a declaration in support of its independence from Ukraine and its intention to join the Russian Federation.

On March 16, a referendum on the peninsula's future was held. There were two questions on the ballot paper: "Do you support Crimea's reunification with Russia as a subject of the Russian Federation?" and "Do you support the reinstatement of the Crimean Republic's 1992 Constitution and its status as part of Ukraine?" The majority of voters (96.77 percent) were in favor of reunification with Russia. Based on the referendum results and the declaration in support of independence, on March 17, 2014, the Crimean Supreme Council passed a declaration of independence from Ukraine. On March 18, a corresponding treaty was signed with Russia, which was subsequently ratified by the Russian State Duma (the lower house of the Russian parliament) and the Federation Council (the upper house). On July 21, a federal constitutional law was adopted on two new entities of the Russian Federation, the Republic of Crimea and the city of Sevastopol with federal status.

A number of regions in the southeast of the country did not recognize the legitimacy of Kiev's new authorities. On May 11, the Donetsk and Luhansk people's republics held referendums on the regions' status. There was one question at the referendum: Do you approve the act of state independence of the Donetsk People's Republic (DPR) and the Luhansk People's Republic (LPR), respectively. According to the electoral commission, 89.7 percent of the electorate in the Donetsk Region voted for state independence, while the independence of the Luhansk region was supported by 96.2 percent. On May 12, the DPR and the LPR proclaimed themselves sovereign states.

On May 24, the self-proclaimed republics signed a treaty of association into Novorossiya, a union of the people's republics.

On November 2, elections of regional heads and legislative bodies were held in DPR and LPR. After counting 100 percent of the ballots, Aleksandr Zakharchenko was elected the head of the DPR, while Igor Plotnitsky became the head of the LPR.

The DPR parliamentary elections were won by the Donetsk Republic party. In LPR, Mir Luganshchine (Peace for Luhansk) secured the majority of votes.

On April 13, 2014, after the self-defense forces seized administrative buildings in the Donetsk, Luhansk and Kharkiv regions, Turchynov, then-acting president of Ukraine, announced the launch of a military operation against eastern independence supporters with the participation of the Armed Forces.

On July 17, Malaysia Airlines flight MH17 en route from Amsterdam to Kuala Lumpur, crashed in the Donetsk Region, killing all 298 people on board. Kiev authorities blamed the disaster on the self-defense forces. The latter said they had no capability to shoot down an aircraft at such an altitude. The investigators' preliminary report said the airliner broke up in mid-air as a result of structural damage caused by "a large number of high-energy objects that penetrated the aircraft from the outside," but the source of those objects was not established. The investigation is being conducted by the Netherlands.

As of November 11, 4,132 people have been killed as a result of the conflict in southeastern Ukraine, including the flight MH17 crash victims, and over 9,000 have been injured, according to a UN report.

As of October 31, the number of internally displaced persons reached 442,219, according to UN.

On November 20, Konstantin Romodanovsky, head of the Russian Federal Migration Service, reported that 826,000 people arrived in Russia from Ukraine, with 230,000 Ukrainian refugees applying for temporary refuge in Russia and 115,000, for a temporary residence permit.

On May 25, 2014, an early presidential election was held in Ukraine, with 21 candidates running for the top position in the state. Petro Poroshenko won with 9,857,308 votes, or 54.7 percent of the turnout. This is the second time in the history of independent Ukraine when a president was elected in the first round. It first happened in 1991, with Ukraine's first president, Leonid Kravchuk. The runners-up were Tymoshenko (12.82 percent) and Oleh Lyashko, from the Radical Party of Ukraine (8.32 percent).

Negotiations on Ukraine's European integration started in March 2007, but the issue came to a head in 2013. Ukraine had planned to sign an association agreement with the European Union (EU) at the Vilnius Eastern Partnership Summit in November 2013, but several days before the summit, the country's Cabinet of Ministers decided to put preparations for the signing on hold. That provoked the country's most serious political crisis, against the backdrop of which an anti-constitutional coup took place in the country in February 2014.

In March, Ukraine's new authorities signed the political part of the association agreement with the EU, and on June 27, Kiev signed the economic part of the document, which envisions the creation of a free trade zone. In September, the Verkhovna Rada and the European Parliament both ratified the agreement.

On November 1, 2014, most of the association agreement came into effect, except for the free trade zone provision, which will kick in on January 1, 2016. The document will come into full force after its ratification by the national parliaments of the EU member countries.