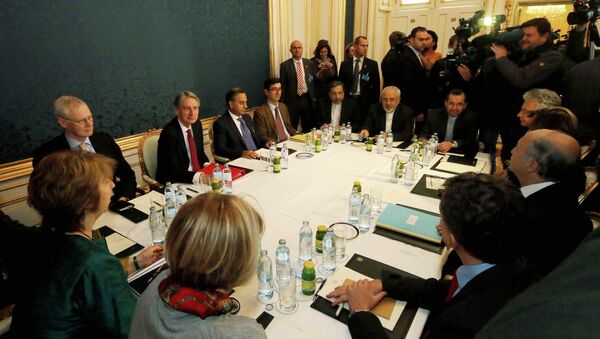 Two days remain until the November 24 deadline for negotiating the Iranian nuclear program expires in Vienna.

VIENNA, November 22 (Sputnik) — With only two days remaining until the November 24 deadline for talks over the Iranian nuclear program, negotiators have intensified their efforts.

According to Jen Psaki, US State Department spokesperson, US Secretary of State John Kerry who decided to stay in Vienna instead of leaving for Paris, held conference call with Gulf ministers from UAE, Kuwait, Qatar, and Bahrain to brief them on the talks in the Austrian capital.

Later on Saturday, Kerry is expected to meet with German Foreign Minister Frank-Walter Steinmeier to discuss the progress of the talks.

Making calls this AM to intl partners. Will meet w FM Steinmeier to discuss status #IranTalksVienna

Russian Foreign Minister Sergei Lavrov is also expected to join the talks on Sunday, though his participation has not been officially confirmed yet.

The P5+1 and Iran are due to reach a comprehensive agreement on Iranian nuclear program by Monday, November 24. But so far there have been conflicting reports about the progress on the talks.

A number of officials, including the UK Foreign Minister Philip Hammond, have noted that serious gaps remain in talks on Iran's nuclear program. Meanwhile, Russian Deputy Foreign Minister Sergei Ryabkov stressed Friday that for a compromise to be reached in the nuclear talks, all sides need to cooperate, if not meet each other half way.

During talks in Geneva in November 2013, the P5+1 group agreed to reach a long-term comprehensive agreement with Tehran by July 2014, guaranteeing the peaceful nature of the Iranian nuclear program. The deadline for the deal was later extended to November 24.

The West has been accusing Iran of developing nuclear weapons under the guise of a civilian nuclear program. Tehran has denied these claims, stressing that its nuclear development is for civilian purposes only, such as meeting the country's growing energy needs.