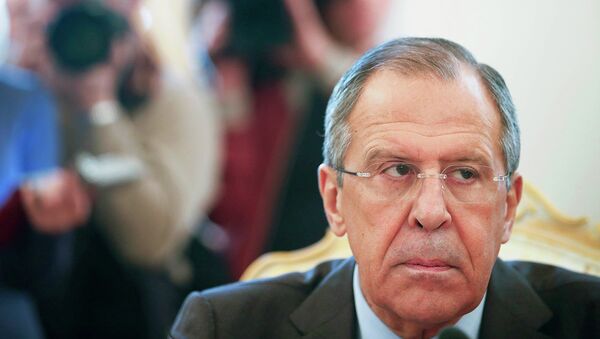 “Our western partners played ‘all-or-nothing’ in Ukraine, they have stepped on their own principles of democratic change of power, have supported the extremists. As the hooligans say, they wanted to ‘bluff us’, I cannot say it in other words, to make us swallow humiliation – Russians and Russian-speaking people in Ukraine,” Russian minister said at the assembly of the Russian Council on Foreign and Defense Policy.

“Always when sanctions were used before – I worked in New-York at that time — our western partners, in regard to North Korea or Iran, or any other countries, they framed sanctions in such a way so that they wouldn’t negatively affect the social sphere, the economy, so that they would affect only the elite, selectively,” Lavrov said.

“Now everything is different. Western leaders publicly say that sanctions should be framed in a way to ruin the economy and raise national protests,” he added.

This is why in the current situation the West “shows that their point is not to change the Russian Federation’s policy, which is illusory in itself, but they want to change the regime,” Lavrov concluded.

Relations between Russia and the West deteriorated amid the Ukrainian crisis, as European and US leaders kept blaming Moscow for its alleged involvement in the Ukrainian internal conflict – a claim that Kremlin has repeatedly denied.

Over the past few months, the European Union, the United States and their allies have implemented several rounds of sanctions targeting Russia's banking, energy and defense sectors, as well as a number of high-ranking officials in retaliation to what they called Russia's aggressive policy in Ukraine.

Moscow repeatedly stated that it is not a party to the Ukrainian internal conflict, adding that sanctions threaten international peace and stability and run counter to the principles of international law.