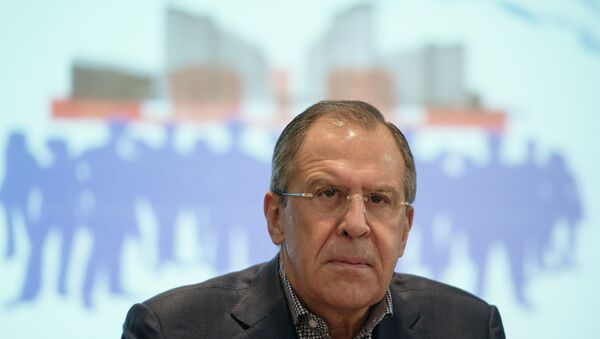 Russian Foreign Minister Sergei Lavrov stated that Russia plans to promote idea of establishing a free trade zone between the European Union and the Eurasian Customs Union as "the integration of integrations."

MOSCOW, November 22 (Sputnik) — Russia plans to promote an idea of establishing a free trade zone between the European Union and the Eurasian Customs Union during the Organization for Security and Co-operation in Europe (OSCE) Ministerial Council meeting in December, Russian Foreign Minister Sergei Lavrov said in Saturday.

“The work is underway, it has become a part of the diplomacy and real politics. It is on the level of discussions now, but I am sure that we will come to the point, which is now called 'the integration of integrations', and this will be one of those important topics, which we want to promote at the OSCE Ministerial Council meeting in Basel,” Lavrov said at the assembly of the Russian Council on Foreign and Defense Policy.

Lavrov added that Russian President Vladimir Putin’s idea of establishing a free trade zone is no longer seen as “exotic”.

He highlighted also that German Foreign Minister Frank-Walter Steinmeier during his visit to Moscow this week supported the idea of establishing a dialogue between the European Union and the Eurasian Customs Union.

The Customs Union between Russia, Kazakhstan and Belarus formally came into existence on January 1, 2010, followed by the creation of a Common Economic Space. The union’s total nominal GDP in 2013 was estimated at $2.4 trillion. The next step is establishment of the Eurasian Economic Union (EEU) between the countries on January 1, 2015, which would create a single economic market for over 170 million people. On October 10, EEU leaders signed an agreement on Armenia's accession to the union.