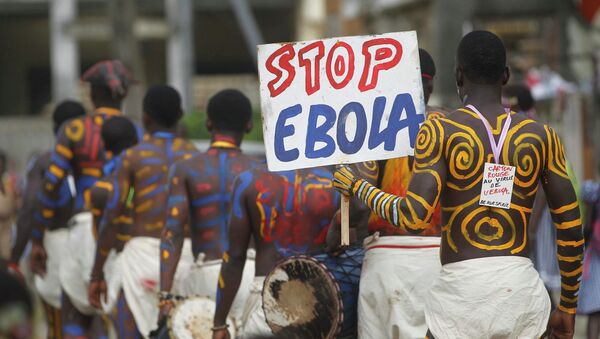 Head of the UN Mission for Ebola Emergency Response claims that Ebola is making the governments of the affected countries in West Africa increasingly unable to fight the virus.

NEW YORK, November 22 (Sputnik) – The Ebola virus, which has spread in West Africa, is making the governments of the affected countries increasingly unable to fight the virus, Anthony Banbury, head of the UN Mission for Ebola Emergency Response (UNMEER) says.

"In the three most-affected countries, 10,000 schools are closed and more than 2 million children who should be in school are now not able to go to school. The World Bank has reported that in Liberia… almost half of the workforce have lost their jobs since the outbreak began," Banbury told the UN Security Council Friday.

"As the virus spreads in countries, the needs of those governments to respond, influencing the financial needs, are increasing significantly, but government revenues are decreasing, so the gap between the available means and needs is getting larger is getting larger on a daily basis," Banbury stressed.

A World Bank survey released this week found that the number of Liberians with jobs has halved since the start of the Ebola outbreak. Researchers also found that 70 percent of respondents said they could not afford enough food.

Liberia has been the hardest hit by the Ebola virus and the country's government has been criticized domestically for the ineffectiveness of its approach to the Ebola fight.

The current Ebola epidemic started in southern Guinea in December 2013 and soon spread to Liberia, Sierra Leone, Nigeria and Senegal. The latter two countries have recently been declared free of the virus by the World Health Organization (WHO).