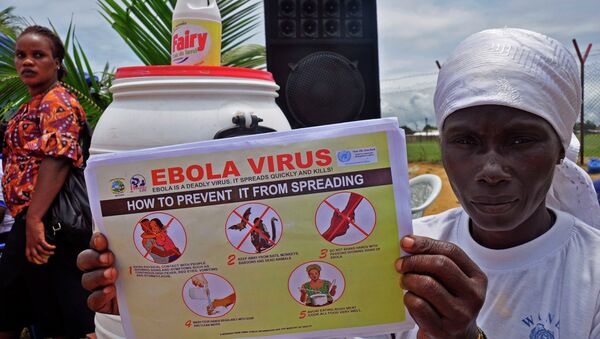 © AP Photo/ Abbas Dulleh
Subscribe
The Senior UN System Coordinator for the Ebola Virus Disease has said that the UN needs about $600 million to fund its efforts to end the Ebola virus epidemic.

"We estimate that the UN system will need about $1.5 billion through to March 2015 to play its part in ending the [Ebola] outbreak. Much has been committed, but there's still a shortfall of around $600 million," Nabarro told members of the UN Security Council Friday.

According to Nabarro, Ebola is slowly being brought under control but still presents a grave threat across West Africa.

"Where the response strategy is implemented fully, transmission is decreasing. And so, while the total number of cases continues to rise, the overall rate of increase really has begun to slow – and this is a good sign," Nabarro said.

The virus is spread through direct contact with the bodily fluids of those infected. There is no officially approved medication for Ebola, but several countries, including Russia, are developing trial vaccines.